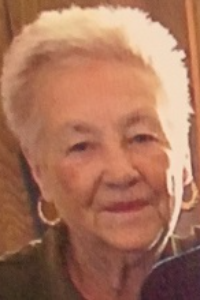 Charlton,MA./Old Orchard Beach, ME.
Dorothy Ruth Andrews (Smith) passed away at home in Old Orchard Beach, Maine, on February 23rd at the age of 86. She was strong and stubborn and fought a 17-month battle with colon cancer with persistence and humor. Her final words were “I love you”.

Dorothy was loved by her large family up and down the Eastern Seaboard and across Canada who were all devoted to their ‘Mom’, ‘Gram’, ‘Grammy’, ‘Mema’ and ‘Aunt Dot’.

Dorothy was born on March 3, 1931 in Florenceville, New Brunswick, Canada and moved to the ‘States’ in 1951. She initially lived in Maine, moved to Massachusetts for the majority of her life but returned to Maine in her last 2 years. She worked hard to help support her family at a variety of jobs including cooking at a lumber camp, working at nursing homes, and waitressing until she eventually retired from Data General in 1993. After retirement she was able to focus on showering her grandchildren and great grandchildren with love and traveling to Canada to enjoy time with her siblings and their families.

Her children and their families were the focus and center of her life.
Dorothy is survived by - her children Sharon Seymour and her husband Philip; Susan Tambolleo and her husband Nick; Christine Buxton and her fiancé Alfred Benoit; and Dale ‘Tim’ Allen and his wife Maryanne. She is also survived by her 15 Grandchildren, 28 Great Grandchildren, their spouses/partners/significant others and a devoted group of nieces and nephews.

There will be calling hours and a Memorial Service at the Robert J. Miller-Charlton Funeral Home, 175 Old Worcester Rd, Charlton, MA. on Saturday, March 3rd, from 9 am – 11 am followed by burial at the West Ridge Cemetery in Charlton. Family, friends and loved ones are invited to the Heritage Country Club in Charlton MA from 1pm - 3pm to remember her and celebrate her life.

In lieu of flowers, memorial donations may be made to the Childhood Cancer Lifeline @ http://www.childhoodcancerlifeline.org/donate.htm; Shriner’s Hospitals for Children; or St. Jude Children’s Hospital.
To leave an on-line condolence, please visit: RJMillerfunerals.net