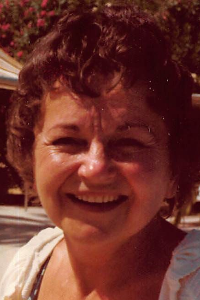 Born in Worcester, she was the daughter of Mayor of Worcester (1938-45) and Sherriff of Worcester County (1945-63), William A. Bennett and Nellie (Bacon) Bennett. Phyllis was a graduate of South High School and the Worcester Art Museum School. She was a graphic artist at Norton Co. during WW II. After the war, she became a fashion illustrator with Filene’s Dept. store and then became an Art teacher at the Bancroft school for 20 yrs. before retiring. She was a member of the visiting board of the Washburn House in Worcester and a longtime member of the former Bethany Congregational Church in Worcester. In her retirement, she continued her artwork and enjoyed taking classes at the Worcester Craft Center.

A Memorial service will be held on Thursday, February 15th at 11 am. In Callahan, Fay & Caswell Funeral Home, 61 Myrtle St., Worcester. In lieu of flowers, Memorial donations may be made to the Worcester Animal Rescue League, 139 Holden St, Worcester 01606