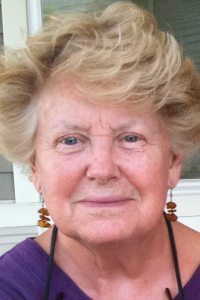 Barbara (Ronayne) Baxter, 85, of Worcester died Saturday, February 10th in Sterling Village. Her husband of 54 years, Walter Baxter died in 2008. She leaves her children, Thomas Baxter and his wife, Cyndi of Worcester, Jodie R.B. Martineit and her husband, Edward of Pawleys Island, SC and Kenneth Baxter and his wife, Jenny of Lemont, PA; a sister in law, Agnes Ronayne of Worcester; six grandchildren, Adam, Brian, Nicholai, Christopher, Conor and Kevin; two great grandchildren and many nieces and nephews. She was predeceased by her brother, Lawrence A. Ronayne, Jr and her grandson, Alexander.

She was born in Worcester the daughter of Lawrence A. Ronayne, Sr. and Catherine (Taylor) Ronayne. Barbara was a member of the former St. Charles Borromeo Church. She was an accomplished artist and previously worked for the Worcester Public Schools as a teacher. She was a member of the Cape Cod Art Association and the YWCA where she enjoyed spending her time swimming with her friends. Barbara’s artwork was known to many and would often be found on display in many gift shops throughout the Orleans area.