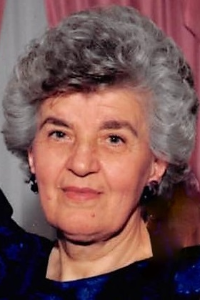 Sophia (Pantazis) Economou, 95, of Holden, died, Sunday, February 11th in Holy Trinity Nursing and Rehabilitation Center, with her loving family by her side. Her husband, Christos Economou died in 1982. She is survived by her son, Achilleus "Archie" Economou and his wife, Arhontoula of Worcester; two daughters, Georgia Chaplain of Holden and Anthoula Kaloudis of Spencer; two brothers, Fotios Pantazis of Athens and Stathis Pantazis of Ioannina, Greece; her sister, Theano Pappas of Athens, eight grandchildren and 15 great-grandchildren and many nephews and nieces.

She was born in Ioannina, Epirus, Greece the daughter of Michalis and Sophia Pantazis, Mrs. Economou was a long time member of St. Spyridon Greek Orthodox Cathedral. She will be remembered as a loving wife, mother and grandmother whose greatest joy was time spent with her family, especially her grandchildren and great-grandchildren.

Her funeral is Saturday, February 17th with a service at 11:30 a.m. in St. Spyridon Greek Orthodox Cathedral, 102 Russell Street. Burial will follow in Hope Cemetery. There are no calling hours. O'CONNOR BROTHERS FUNERAL HOME, 592 Park Avenue is assisting the family with arrangements. In lieu of flowers, memorial contributions may be made to St. St. Spyridon Greek Orthodox Cathedral, 102 Russell Street, Worcester, MA 01609 or to Holy Trinity Nursing and Rehabilitation Center, 300 Barber Avenue, Worcester, MA 01606.