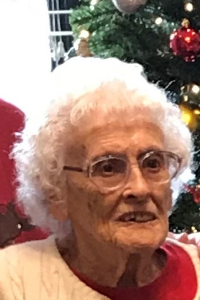 Pauline Odona (Quavillon) Lavella, 95, of Worcester, died Friday, February 9, 2018 at Saint Vincent Hospital. She was born in Burlington, VT, daughter of George and Eldora (Langevin) Quavillon and graduated from Commerce High School in Worcester.
Pauline worked for Harrington Richardson and Sears Roebuck for many years before moving to St. Petersburg Florida where she lived for 35 years. She was very active in her park community and served as president of their Social Club. Upon retirement from Webb’s City Department Store in St. Petersburg she moved back to Worcester in 2004. Pauline was a longtime member of Mount Carmel Church and the Golden Year’s Club.

Pauline was predeceased by three husbands, Donald Englund, Adonis Roberts and Liberato Lavella. She is survived by her son, Robert A. Englund and his wife Joyce of Worcester; two grandsons, Scott Englund and his wife Lindsey of Fitchburg and Jeffrey Englund of Worcester; two great grandchildren, Evan and Emily Englund and her cherished godchild, Jacqueline Breault of Sutton. She also leaves a stepdaughter, Elizabeth Elliot of Millbury, her extended family: grandchildren Nicole Hoyt Martin and her husband Scott, Alan Hoyt and his wife Kori, David Hoyt and his wife Dianna and all of their children. Nephews and nieces and many dear friends in her Mount Carmel and Shrewsbury Street communities. Two brothers, Clarence and Robert Quavillon and a step son, Edward Lavella predeceased her.

A visiting hour will be held on Thursday, February 15 from 10:30am until 11:30am at Callahan Fay & Caswell Funeral Home, 61 Myrtle Street immediately followed by a funeral service in the funeral home at 11:30am. Burial will follow at Worcester County Memorial Park in Paxton.
In lieu of flowers, donations in Pauline’s memory may be made to Visiting Nurses Association, 120 Thomas Street, Worcester, MA 01608.