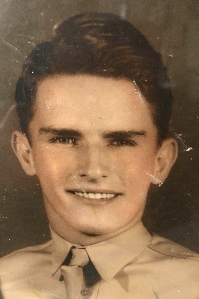 He leaves his companion of 23 years, Lorraine M. (Kozub) Brissette; a stepson, Francis Prest of Worcester; 15 step-grandchildren; many step-great-grandchildren; nephews and nieces; and his extended family. He was preceded in death by 3 step-children, Lillian Thibeault, Hazel Ellis and John Prest.

He was born and raised in Worcester, the oldest of the 5 children of Jude D. and Alice L. (Thibault) Landry. He lived in Holden before moving here in 1995.

He was an Army veteran of World War II and a survivor of the attack on Pearl Harbor on December 7, 1941.

Al was a machinist at Morgan Construction in Worcester for many years before retiring. He also was an electrician who worked for his brother-in-law on a part time basis.

He was a member of Saint Joseph Basilica. He enjoyed deer hunting and fishing, dancing and country music, and playing cards and horseshoes. He belonged to the new England Country Music Association at the VFW in Uxbridge for most of his adult life. He always loved to help people and provided many with free electrical work.

The funeral will be held Tuesday, February 13, from Scanlon Funeral Service, 38 East Main Street, with a Mass at 10:00 AM in St. Joseph Basilica, 53 Whitcomb Street. Burial will be in Worcester County Memorial Park, Paxton. Visitation will be held on Monday, February 12, from 4:00 to 6:00 PM in the funeral home. Arrangements are under the direction of Sitkowski & Malboeuf Funeral Home, 340 School Street, Webster.