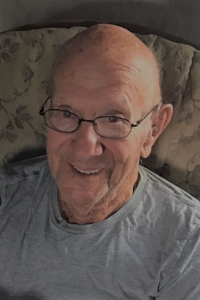 
Worcester - Bernard W. Manseau, 90, of Worcester, died peacefully on Thursday, February 8th in the Meadows Nursing and Rehabilitation Center in Leicester with his family by his side.
Bernie was married for 52 years to the late Rita M. (Richard) Manseau who died in 2006. He is survived by three sons, Ronald H. Manseau and his wife, Linda Ordoukhanian of Longmeadow, MA, Michael A. Manseau and his wife, Rachel of North Grosvenordale, CT and Peter N. Manseau and his wife, Lori of Charlton; three daughters, CarolAnn Dean and her husband, James of Oak Hill, VA, Brenda E. Blood and her husband, Jay of Spencer and Stacey M. Caudillo and her husband Larry of Los Angeles, CA; 15 grandchildren, 4 great grandchildren and many nephews and nieces.
Mr. Manseau was born in Warren, MA, son of the late Arthur V. and Eva (Guyon) Manseau and is also predeceased by two brothers, Roland Manseau and Arthur V. Manseau Jr.
Bernie proudly served in the United States Navy during World War II and the United States Army during the Korean War. He was awarded the Purple Heart, Bronze Star and the Korean Service Medal with 3 Bronze Service Stars. Mr. Manseau came back from his service and went to work for the City of Worcester in Department of Public Works Water and Sewer Division for 42 years as a heavy equipment operator and foreman. Bernie also worked as a cook at the former Driftwood in Shrewsbury, a bartender at “The Famous” William Paul House in Holden, as security personnel for the former Lechmere’s in the Greendale Mall and for Prifti Candies as the Easter Bunny.
He was a member of Our Lady of the Angels Church, the Harmony Club of Worcester, the American Legion Post 0279 in Auburn and a lifetime member of VFW Post 6907 in West Boylston.
Bernie was a loving family man and many of his friends and family will have fond memories of him and his favorite sayings, including “What a country” and “You gotta love it”.
The funeral will be held on Tuesday, February 13th from the Alfred Roy & Sons Funeral Home 12 Hammond St. with a Mass at 10 AM in Our Lady of the Angels Church 1222 Main St. Burial with military honors will follow in Notre Dame Cemetery, Worcester. Calling hours are on Monday, February 12th from 5 to 8 PM in the funeral home and the Harmony Club of Worcester will perform a funeral ritual at 7 PM during the calling hours. Memorial contributions in memory of Bernie may be made to the Harmony Club of Worcester Scholarship Fund c/o Alfred Roy & sons Funeral Home 12 Hammond St. Worcester, MA 01610 or to Veteran’s Inc. 69 Grove Street Worcester, MA 01605.
To share a memory of Mr. Manseau, send the family a message, or for directions to the funeral home please visit www.Royfuneral.com .