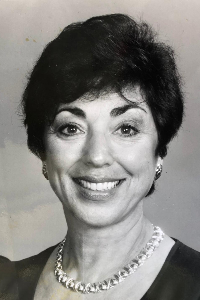 Jeghelian, Janet (Tevekelian) of Walpole, formerly of Westwood, February 3, 2018. Beloved wife of the late Haig Jeghelian. Devoted mother of Armen and Tina Jeghelian and the late Robin Theriault. Loving grandmother of Emily. Sister of Claire Kushigian and her husband Harry. Loving aunt of Armine Kanis and Nairi Koroghlian. Also survived by many other family members and friends. Funeral service at Saint Stephen’s Armenian Church, 38 Elton Avenue, Watertown on Saturday, February 10 at 10:00 a.m. Visiting hours will be held in Saint Stephen’s Armenian Church on Friday, February 9 from 4 – 8 p.m. Relatives and friends are kindly invited to attend. In lieu of flowers, memorial gifts may be made to Saint Stephen’s Armenian Church, Camp Haiastan or the Armenian Women’s Welfare Association Inc. Interment at Mount Auburn Cemetery, Cambridge.

Janet Tevekelian Jeghelian graduated from Newton High School and from Boston University’s Sargent School for Physical Therapy. She furthered her training at the New York University Bellevue Medical Facility where she treated an impressive list of patients including Roy Campanella, a famous baseball player. She returned to the Boston area and continued her career as a Physical Therapist and in fact was the personal therapist for Joseph Kennedy, the President’s father, at the Kennedy compound in Hyannis.

She and Haig (Gunder) Jeghelian rekindled their friendship and married in 1960. They were a dynamic couple. Gunder was working in creative marketing at Gillette and Janet’s newfound passion for politics began in 1972 when she was the first female elected as a Westwood Selectman. They raised three children over the years, the late Robin Theriault, along with Armen and Tina Jeghelian.

Her intelligence, quick wit and drive for current events eventually led to another career as a well known radio talk show host for WRKO and WBZ. You may recall commonly seeing Janet’s picture on billboards and buses throughout Boston during these years. The Ted & Janet show in the 1980’s was highly ranked among the Boston AM Morning Talk Radio market.

She was then sought after as a spokesperson for various fundraisers and charitable events. For example, for many years she hosted the Easter Seals telethon on WBZ television. Her broadcasting successes led her back to the political arena. Janet ran as a candidate for the US Senate and for the Massachusetts Lieutenant Governor position.

Before retirement her most recent position was the Director of Rehabilitation at the Stone Institute. During this time, Janet was given the Downtown Boston Business & Professional Women's Club - Woman of Achievement Award - for her exceptional qualities of leadership and integrity and her distinguished achievements for the betterment of her community.

Janet’s community involvement was quite extensive. She was a Trustee of St. Stephen’s church and a member of their Ladies Guild and Church choir. She also sang in the Yerevan Choral Group, and served as Board President for the Armenian Women’s Welfare Association as well as a past Trustee for Boston University.

Being very athletic from a young age, Janet enjoyed participating in the AYF Armenian Olympics and earned the Boston Siamanto chapter a total of 35 points in the baseball throw and high jump events. She loved watching the Patriots, the Boston Bruins, the Celtics, and always enjoyed playing tennis especially with her sister, Claire Kushigian.

Janet’s cherished moments were spent entertaining with family and close friends. In lieu of flowers, donations can be made to either St. Stephen’s Church, Camp Haiastan, or the Armenian Women’s Welfare Association.