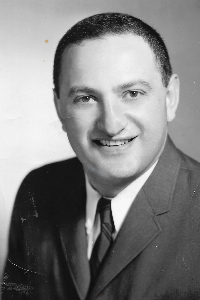 Eddy was born in Worcester, son of the late Michael and Anna (Karaguesian) Shamgochian. He graduated from Worcester Academy and Gordon College and attended Harvard Divinity School. He earned his J.D. degree from Boston University School of Law, working as an attorney for many decades. He was a member of the Armenian Church of Our Saviour in Worcester.

A talented drummer, and one of the founding members of the renowned jazz collective the Saxtrum Club at the young age of 13, “Eddy Sham” was playing a daily coast-to-coast radio show with the Dol Brissette Orchestra by the time he was 14. Between stints with other Northeast orchestras and leading his own band, Eddy Sham and the Shamtones, he played professionally up and down the East Coast from Bermuda to Montreal. After retiring from performances, Eddy was deeply involved with the American Federation of Musicians, serving as President of the Worcester Musicians Association and as an untiring advocate for the interests of working musicians.

His generous and positive attitude will be missed immensely by those he has left behind, but in many ways his nature lives on in his family. The rich life that he led has imparted his confidence to his grandchildren and his caring spirit is deeply ingrained in the Shamgochian family’s sense of right.

Calling hours will be held on Monday, February 5, 2018 from 4-7 p.m. in Nordgren Memorial Chapel, 300 Lincoln St. Worcester. Edward’s funeral is scheduled for Tuesday, February 6, 2018 at 11:00 a.m. in the Armenian Church of Our Saviour, 87 Salisbury St. Worcester, MA 01609. Following the service, the burial will take place in the Shamgochian family lot of Hope Cemetery.

In lieu of flowers, donations in Edward's name may be made to the Dr. Maureen and Edward Shamgochian Scholarship & Research Award Fund at Worcester State University. For directions or to leave an online condolence message, please click on link.