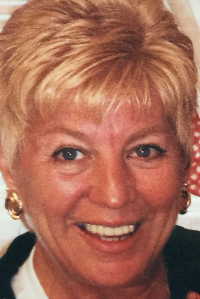 Worcester – Patricia A. (Donahue) Bourdeau, 65, of Worcester and formerly of North Quincy, died peacefully in her home on Thursday, January 25th.
Patricia is survived by her daughter, Nicole Bourdeau Cormier of Worcester; her son, Mark S. Bourdeau II of Worcester; five grand children: Matthew Cormier, Madelyn Bourdeau, Benjamin Cormier, Andrew Bourdeau, and Nicholas Cormier. Her longtime companion, Kenneth Burns of Quincy, cared for Patricia during her illness. Patricia had ten siblings: Robert Donahue, Katherine Donahue, Gail Vallario, Maureen Winkle, Judith Donahue, Cynthia Card, Jean Goldstein, Richard Donahue Jr., Cheryl Mickiewicz, and Kimberly Boyle, as well as numerous nieces, nephews, aunts, uncles, and cousins, includ-ing Donna Reis, Mary Sandstrom, and Linda Fish, whom she was very close with.
Known to family and friends as “Pat,” she was born in Worcester, daughter of the late Richard F. and Theresa Marie Eva (Choiniere) Donahue. She graduated from North High School in Worcester, and continued her education at Quinsigamond Community College and Assumption College, where she received both her bachelors degree and masters de-gree magna cum laude in business. Pat was a very motivated, hardworking woman who excelled in academics as she worked full-time in the finance industry and raised two chil-dren as a single mother. If there was a way to do something, she found it and achieved her goal.
She worked for many years for State Street Bank in Boston, where she was a Senior Associ-ate in secure entitlements and securities in the area of corporate actions. She loved what she did for work, and enjoyed the company of her many colleagues in and outside of the workplace.
Pat enjoyed traveling, taking trips to the casino, and spending time with her family and friends, especially her grandchildren. She enjoyed taking them to amusement parks to ride the roller coasters, playing Monopoly (she often won) and Bingo (she loved giving out prizes). She had a passion for cooking and baking and even continued to cook and bake for those around her during her illness, until she was physically unable to do so. Her home-made carrot cake was her specialty. Pat also loved shopping, and very rarely came home empty handed, leaving racks at Kohl’s at TJ Maxx rather empty. If there was fun to be had, Pat wanted to be at the center of it.
Pat was a very kind, generous woman. When someone needed help, Pat was there for them. She was a good friend to many, most especially to Diane Delaney and the crew from Quincy, Edy Mungovan, Linda Taylor, Mary Wright, and Terry Pellerin, who made her smile during her last days as they recounted tales of friendship and fun times.
Special expressions of gratitude toward the staff at Dana-Farber Cancer Institute, who tried their best to help Pat to beat her illness. Heartfelt thanks to the staff of Overlook Hospice, who gave exceptional care to Pat and unwavering support to her family as they cared for her in her final days.
A celebration of Pat’s life will be held on Saturday, February 3, 2018 at Leo’s Restaurant from 12:00pm to 3:00pm. Pat specifically asked that everyone have fun, enjoy good food, drink, and music, and remember her with laughter and love in their hearts. Memorial con-tributions in her memory may be made to the Patricia A. Bourdeau Memorial Scholarship Fund Webster First Credit Union, 149 West Boylston Street, West Boylston, MA 01583.
Alfred Roy & Sons Funeral Home 12 Hammond St. Worcester is assisting the family with arrangements. To share a memory, or to sign the online guestbook, please visit www.Royfuneral.com