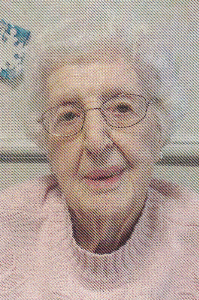 She leaves behind 2 nieces; 2 nephews; 2 grand-nephews and a grand-niece. She was preceded in death by her sister Catherine A. Sullivan.

She was born in Webster on May 26, 1914 and graduated from both St Louis High and the RI Hospital School of Nursing.

At the outbreak of WWII, Ms. Sullivan joined the U. S. Army as part of the 48th Evacuation Hospital Unit and served in the China Burma India Theater. After the war she joined the Army Reserve and continued as a nurse at the West Roxbury VA Hospital. In 1974 she retired from the Army with the rank of Colonel and 32 years of military service.

The funeral will be held Friday, February 2, from Scanlon Funeral Service, 38 East Main St., Webster, with a Mass at 11:00 AM in Saint Roch’s Church, 334 Main Street, Oxford. Burial will be in Calvary Cemetery, Dudley, MA. The Webster-Dudley Veterans Council will provide military honors. Visitation will be held from 9:15 to 10:15 AM Friday, February 2, in the funeral home. The family requests that flowers be omitted and donations in her name may be made to St. Jude’s Shrine, 512 West Saratoga St., Baltimore, MD 21201.