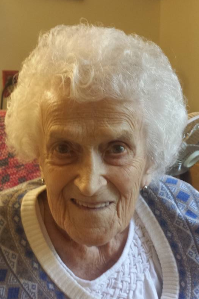 She was born on April 26, 1918 in Webster and raised in Oxford, the daughter of Francis and Lucille (Mikos) Dudek. She lived in Webster since 1940.

Mrs. Moroz worked as an invisible mender at several local mills including Packard Mills in Dudley, Webster Spring in Oxford and Anglo Fabrics Company in Webster. She retired in 1983.

She was a communicant of Saint Joseph Basilica and a member of its Holy Rosary Sodality, Sacred Heart Society, Saint Anne Society and the St. Joseph Polish Women’s Club.

The funeral will be held Tuesday, January 23, from Scanlon Funeral Service, 38 East Main St., with a Mass at 10:00 AM in Saint Joseph Basilica, 53 Whitcomb St. Burial will be in Saint Joseph Garden of Peace. Visitation will be from 4:00 to 7:00 PM Monday, January 22, in the funeral home. Donations in her name may be made to St. Joseph Basilica, 53 Whitcomb St., Webster, MA 01570. Arrangements are under the direction of Sitkowski & Malboeuf Funeral Home, 340 School St., Webster.