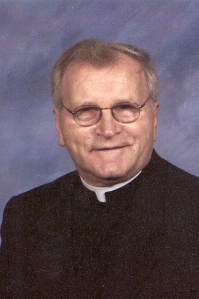 He leaves 2 nieces, Elzbieta Grodzki of Australia and Renata Rutkowska of Poland; and a nephew, Tadeusz Werpachowski of Poland.

He was born in Ostasze, Poland on May 5, 1932, a son of Stanislaus and Helena (Zimnoch) Bielonko. He graduated from high school seminary in 1950 and was ordained a priest in Warsaw on April 12, 1959 by Bishop Z. Majewski.

After ministering in Poland, he moved to the United States and was incardinated in the Diocese of Worcester in 1973. He was an associate pastor at Our Lady of Jasna Gora Church in Clinton, Saint Hedwig Parish in Southbridge and from 1970 to 1983 at Saint Joseph Church in Webster. He then served at Saint Ann’s Parish in North Oxford and at Saint Andrew Bobola Church in Dudley from 1989 until his retirement.

His funeral Mass will be offered at 10:00 AM Saturday, January 20, in Saint Joseph Basilica, 53 Whitcomb Street, with Bishop Robert J. McManus as the main celebrant.. Burial will be in Saint Joseph Garden of Peace. Visitation will be held from 5:00 to 7:00 PM Friday, January 19, in the basilica, with a vigil service at 7:00 PM. Donations in his name may be made to Saint Joseph Basilica, 53 Whitcomb Street, Webster, MA 01570. Arrangements are under the direction of Sitkowski & Malboeuf Funeral Home, 340 School St., Webster.