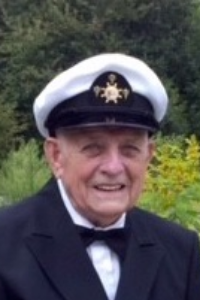 Edward was born in Worcester on September 19, 1930, one of four children to Loretta C. (Perreault) and Exlore P. Metivier. After high school, is he enlisted in the Navy, during the Korean War, serving as a French Translator aboard the USS McGowen serving his country proudly in the Antartic and Italy.

Edward was known by most as the “Donut Man”. He owned the Donut Chateau in West Boylston from 1964 until 1997. Never missing a day of work, the Chateau was always open on stormy days both to warm the bones of the local plowers and as a place for people to gather to sort out the politics of the town. In addition, Ed opened and sold a donut shop in Tatnuck, Millbury and later purchased Toupins in Worcester Center. Along with his family he operated a large catering service and offered the BEST fish chowder, winning 2nd place in the Worcester Chowder Festival.
After retirement and while living in NY with his family, Ed followed his love of sailing and cooked on several sailing journeys including on the “Half Moon” a full scale reproduction of the Dutch ship sailed to North America in 1609 by Henry Hudson. Upon returning to Sterling Ed became actively involved in raising funds for the Mass Audubon in Princeton – all funds going to camperships for children.

Edward is predeceased by his beloved wife, Mae who passed away in 1997. He leaves his two daughters Tracy Wall and her husband, Kevin of Groton and Joan Bertrand and her husband, Bruce of Sterling; as well as his four grandsons, Ryan and Christopher Wall and Jeffrey and Michael Bertrand.

Relatives and friends are invited to attend Edward’s Life Celebration on Saturday, January 20th with visiting hours held from 8:30-10:30 a.m. at the FAY BROTHERS Funeral Home, 1 West Burial Street, West Boylston. His funeral will follow at 11:00 a.m. with a Mass of Christian Burial at Our Lady of Good Counsel Church, 111 Worcester Street, West Boylston. Burial will follow in Notre Dame Cemetery, Worcester.

In lieu of flowers , memorial donations may be made please to the Mass Audubon-Engelhardt Education Fund, Wachusett Meadow, 113 Goodnow Rd, Princeton MA 01541. To share a memory or leave an online condolence, please visit www.faybrothers.com