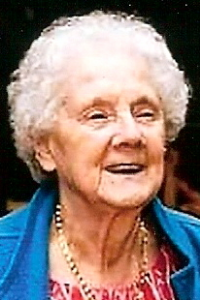 SPENCER: Lillian B. (Sourdif) Gagne, 90 of Howe Village, died Monday, Jan.15 in St. Vincent Hospital, Worcester.
She was the wife of Joseph H. "Jack" Gagne who died in 2010. She leaves her son John P. Gagne and his wife Christine of Spencer, her daughters Paula A. Letourneux and her husband Robert of Spencer, and Joyce M. Hughes and her husband Michael of Auburn, a brother Leo Sourdif and his wife Joyce, a sister Juliette Woods all of Spencer, 6 grandchildren; James Letourneux, Nicole Dacey, Joseph Letourneux, Marc Hughes, Adam Hughes and Amanda Mantia, her great grandson Eric Hughes, many nieces and nephews. She is predeceased by 5 sisters.
Born in Spencer, she was the daughter of Delphin and Exina (Mathieu) Sourdif. She was a longtime shoe worker at the former Brookfield Athletic Shoe Co. in E.Brookfield, retiring in 1983.
She was a member of Mary, Queen of the Rosary Parish, and Gaudette-Kirk Post 138 American Legion Women's Auxillary. Lill enjoyed playing bingo with her friends at the Knights of Columbus and the Howe Village Social Hall, she also loved music and dancing. The family would like to thank all the loving and supportive people who brought her light, laughter, and dignity over the years. The kindness you’ve shown her echoes in our hearts.

Her funeral will be held on Saturday, Jan. 20 from the J.HENRI MORIN & SON FUNERAL HOME, 23 Maple Terr., Spencer with a Funeral Mass at 10 a.m. in Our Lady of the Rosary Church, 7 Church St., Spencer. Burial will follow in Worcester County Memorial Park, Paxton. Calling hours are Friday from 5 to 7 p.m. in the funeral home. Memorial donations may be made to Mary, Queen of the Rosary Food Pantry, 60 Maple St., Spencer, 01562 or Spencer Rescue Squad, P.O.BOX 147, Spencer MA 01562.
www.morinfuneralhomes.com