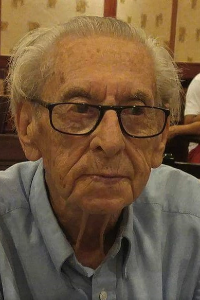 WORCESTER – Clarence W. Gonyea, Jr., 91 of Worcester, passed away Sunday, January 14, 2018 in his home. His wife Elizabeth fisher died in 1973. He is survived by three sons: Michael J, Paul E., and James J. Gonyea; four daughters, Jean F. Barille, Kim E. Willett, Theresa A. Pinto, Tina Livesay; twenty grandchildren and many great grandchildren. He is predeceased by sons, Brian and David Gonyea, grandson Corwin; brothers Earl, Norman and Everett Gonyea and a sister Lila Richard. He was born in Worcester a son of Clarence w. and Alice (Adams) Gonyea.
Mr. Gonyea worked as a custodian for Pressmet Company. Prior to his years there he worked for Worcester Press Steel Company and the Florida railroad. He served in the US Coast Guard. Clarence was a member of St. John Church and frequently volunteered in the Food for the Poor program he also was a volunteer at Friendly House when his children were younger. Frequently found walking, he was a longtime fixture in the neighborhood.