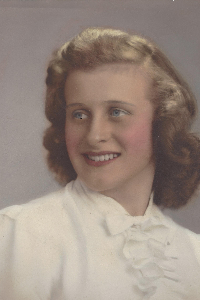 Mary Agnes (Daly) Shea, age 90, of Shrewsbury, went to her heavenly home on Thursday, January 4, 2018.
Mary was born in a three decker on Providence Street in Worcester, Massachusetts on January 14, 1927, and was a first generation American.
She was the daughter of John P. Daly, Sr. and Julia M. (O'Connor) Daly, proud, hard-working immigrants from County Kerry, Ireland.
She graduated from Ascension High School in 1944 and Salter Secretarial. School. She also graduated from Worcester State College in 1984 at the age of 57 with a Bachelor of Science Degree in Urban Studies. Mary worked many years as a secretary in the private and public sectors. She also worked as a real estate agent and census worker. A favorite memory from her career was working with her father at American Steel and Wire Company, South Works, Worcester.
Mary enjoyed traveling and spending time with friends and family all her life. She was married to John J. Shea of Worcester in 1953 and had four sons. Widowed in 1968 at the age of 40, her priority became her sons educations. Mary saw them all graduate from St. John's High School, the College of the Holy Cross and law school. She raised her sons to be gentlemen and good citizens.
Mary is survived by three of her sons, Robert T. Shea of Shrewsbury, MA, James C. Shea of Vermont and William E. Shea and his wife Cornelia of Texas, six grandchildren and one great-grandson. She is also survived by her brother, John P. Daly, Jr., and his wife Adrienne of Worcester and her sister Marguerite Ryan and her husband Gerald of New Jersey and many nephews and nieces, all of whom she loved dearly. She was predeceased by a son, John M. Shea and her sisters and brothers-in-law Ann and John Leary and Julia Cecilia and Thomas Derry.
A celebration of Mary’s life was held at St. Mary’s Church in Shrewsbury on January 8, 2018. Memorial gifts may be made to Dana Farber Cancer Institute in memory of Mary Agnes Shea to support cancer research and patient care at Dana Farber Cancer Institute, P.O. Box 849168, Boston, MA 02284. DIRSA-MORIN FUNERAL HOME, 298 Grafton Street Worcester assisted the family with arrangements.