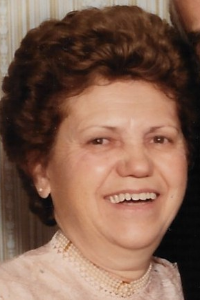 Olga (Gatzoyiannis) Bartzokis, formerly of Worcester, Mass., passed away at home at the age of 90 surrounded by her family and friends. Known for her dedication to her husband, Constantinos, and four children, Spryo, Christos, Thomas and Eleni, she was born in Lia, Epirus, Greece on November 28, 1927.
In 1948 Olga led her family out of her Communist guerrilla-held village during the Greek Civil War. After arriving in the US, Olga took charge of the Gatzoyiannis household and two years later, married a Greek immigrant from the nearby village of Costana, Konstantinos (Dino) Bartzokis, and they started their own family.
In 1966 the Bartzokis family moved to Needham, where Dino opened the Needham House of Pizza, which is still in operation today. Olga was devoted to her family and side-by-side with her husband and children, they operated the family restaurant. Working together, Olga's immigrant work ethic was imparted to her children, two who became doctors and two who became lawyers. From the savings they put aside from the pizza parlor, Olga and Dino (who predeceased her in 2006), invested wisely in real estate and were able to live their later years in comfort.
Olga is survived by three sons and a daughter: Spyro, a lawyer in Orlando with his wife Calliope; Christos, also a lawyer in Orlando with his wife Patricia; Thomas, a cardiologist in Boca Raton with his wife Peggy; and Eleni, a physician in Needham. She is also survived by seven grandchildren: Katherine Ashford and her husband Jason, Dean Bartzokis and his wife Shannon, Kristin Bartzokis, Alexander Bartzokis, Elizabeth Bartzokis, Marina Bartzokis and Melina Chadbourne.
Three siblings also survive her: Alexandra Stratis of Worcester, Tina Haithis of Milton, and Nicholas Gage and his wife Joan of North Grafton. She is also survived by two great grandchildren and eight nephews and nieces.
Olga was active in both St. Spyridon Greek Orthodox Cathedral of Worcester and St. Demitrios Greek Orthodox Church in Weston, as well as several organizations formed by natives of the Epiros region in Greece.
In lieu of flowers, contributions may be made to St. Spyridon Greek Orthodox Cathedral, 102 Russell St., Worcester, where the funeral will be held at 11 a.m. on Wednesday, January 10. Burial will be next to her husband of 55 years at Hope Cemetery. All those attending are invited to a luncheon at l:00 p.m. at the Manor in West Boylston to celebrate Olga’s life.