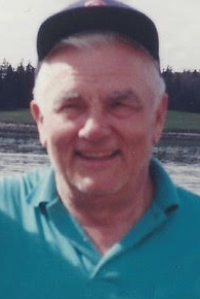 SHREWSBURY____Chester Levins, 88, a longtime resident of Shrewsbury, passed away on Wednesday, January 3, 2018 at St. Vincent Hospital in Worcester. A devoted husband, he is predeceased by his wife of 50 years, Audrey L. (Izbicki) Levins, who died in 2004. He is survived by his children, Theresa Levins of Oakham, Sandra (Levins) Rudzinski and her husband Andrew of Corinth, ME, and Chester L. Levins and his wife Colleen Morrissey-Levins of Shrewsbury; three grandchildren, Andrew Rudzinski and his wife Stephanie, Alix (Rudzinski) Adams and her husband Michael, and Joseph Levins; and many nieces and nephews near and far. He is also predeceased by his eight siblings: Henry, Watslo, Adolph, Alexander, Joseph, William, Stephen and Josephine.

He was born in Worcester, son of William and Theresa (Iluskowska) Lojko (Levins). After graduating from Commerce High School, he attended Worcester Junior College, and went on to receive a Bachelor’s Degree from Western Illinois University and a Professional Masters of Business Administration from the Isenburg School of Management at the University of Massachusetts. Mr. Levins served in the United States Army during the Korean War and subsequently worked as an auditor for the Commonwealth of Massachusetts Department of Employment Security for many years prior to retiring. Chet was a member of St. Mary of the Hills parish in Boylston.

Chet devoted his life to his wife, children, and extended family. He enjoyed wood carving and carpentry, building his own homes, and helping his children build and renovate theirs. Chet and Audrey’s home was known to friends and family to be a gathering place filled with love, light, and happiness. Chet instilled in his family the importance of responsibility, hard work, and education, and also to enjoy life, help others, play sports, and root for the Patriots.
Calling hours will be Wednesday, January 10, 2018 from 6:00 p.m. to 8:00 p.m. at HENRY-DIRSA FUNERAL HOME, 33 Ward Street, Worcester. A funeral Mass will be held on Thursday, January 11, 2018 at 10:30 a.m., in Our Lady of Czestochowa Church, 34 Ward Street, Worcester. Burial with military honors will follow at Worcester County Memorial Park, Paxton. www.worcesterfuneral.com