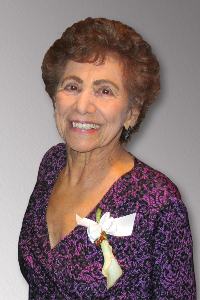 Maro Varadian Kachadoorian, 95, passed away peacefully on January 3, 2018, surrounded by her loving family. Maro was born December 27, 1922 and raised in the Edgewood section of Cranston, RI. She was the daughter of Sarkis and Ramella (Agajanian) Varadian. She was the beloved wife to the late Sarkis “Jack” Kachadoorian, of 52 years. She was predeceased by her brothers Varad, Melkon, Haig, and John Varadian.

Maro was a graduate of Cranston High School, RI. She served as first female President of Providence Armenian Youth Federation (AYF) in 1943. Maro excelled in sports, earning medals at the 10th AYF Olympics in 1943. She was first female high scorer at those games specializing in dashes and long jump. This was recognized in 2015, when Maro was honored as AYF Olympic Queen in Providence, RI.

Maro was active at Holy Trinity Armenian Apostolic Church in Worcester. She and her husband were among the godparents to the church in 1970. She was a lifelong member of Worcester’s Armenian Relief Society and was President of the Holy Trinity Women’s Guild.
Maro leaves behind three children: Debbie Salerno (Anthony) of Northborough, Harry Kachadoorian (Karyn) of Worcester, and Levon Kachadoorian of Leicester; six grandchildren: Melanie, Nishon, Taline, Ani, Arianna and Alyssa; and six great-grandchildren.
Maro was a financial counselor at UMass Medical Center Worcester. She served the hospital from 1976 to 2002.

Family and friends will miss her unmatched zest for life. Matriarch to the Varadian and Kachadoorian families, Maro’s ethos lives on, as four generations continue to honor her legacy through their devotion to family and the Armenian community.