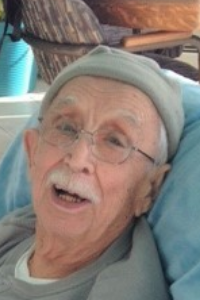 WORCESTER- Charles Edward Patrock, Jr., lovingly known as “Da”, entered heaven peacefully on January 2, 2018 with his daughter and grand-daughter by his side at St. Vincent Hospital. He was 92.

He was the husband of the late Mary (Long-Karolis) Patrock, who was the love of his life, who passed away in July of 2011.

Mr. Patrock was born in Worcester on September 29, 1925 a son of the late Charles E. Patrock Sr. and Mary (Yanolis) Patrock. Charles attended local schools and graduated from Commerce High School in 1942. Following his graduation, he enlisted in the United States Navy where he proudly served his country aboard the destroyer ship, the USS Thomas F. Nickel. He often shared stories about being in the navy and the places he had seen.

Following his deployment, he returned to Worcester and met the love of his life, asked her out on a date and on that first date asked her to marry him. They were married eight months later and shared 62 beautiful years together.
Charles took classes at Worcester Polytechnic Institute where he earned certificates in Engineering. Mr. Patrock then joined the former Hammond Plastics and then Carl Gordon Industries before ultimately reorganizing as American Polymers in Oxford, Mass. where he worked as Vice President of manufacturing until his retirement in the early 1990’s. He loved his job and the company was often referred to as the “smallest plastics giant”. They were certainly pioneer’s in the plastic’s industry.

His daughter, grandchildren, & family were the light of his life. His strong marriage and love of his wife was an inspiration to everyone that knew him. Charles’ incredibly strong values, work ethic and love of family have been instilled in his loved ones. They will fondly remember his obsession for sharpening knives (all kinds of knives!) His passion for his John Deere rider and keeping his yard and lawn perfectly manicured. His knowledge for carpentry, plumbing and electrical work. Even into his 90’s there wasn’t a project that he wouldn’t take on even renovating his daughter’s kitchen and doing work at his granddaughter’s home. An unforgettable moment was when he proudly walked his granddaughter down the aisle on her wedding day October 2016.

He leaves behind many that will miss his talents and big heart especially his daughter, Lesa Ann Patrock and her life partner, Gary Carnevale of Dudley; his granddaughter, Lesli Morgan Patrock and her husband Timothy Wolcott of Charlton and his grandson, Joseph Charles Patrock, who is his name sake. He is predeceased by three siblings, John Patrock, Stella Patrock-Army, and Stanley Patrock; several nieces and nephews.

Family and friends will honor, remember and celebrate his life by gathering on Sunday, January 7th from 2:00pm until 5:00pm at CALLAHAN, FAY & CASWELL Funeral Home, 61 Myrtle St., Worcester. A funeral Mass will be celebrated at 10:00am by Monsignor Thomas Sullivan on Monday, January 8th at Christ the King Church, 1052 Pleasant St., Worcester. Burial will follow at St. John’s Cemetery. Memorial donations may be made to Veterans INC., 69 Grove St., Worcester, MA 01605