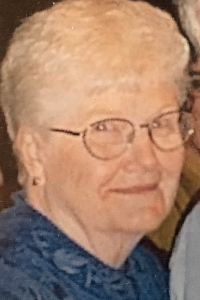 Lucy M. (Swisher) LaPointe, 93, of Worcester died Saturday, December 30th in CareOne Millbury. Her husband, Roger J. LaPointe died in 1998. She leaves two sons, David R. LaPointe and Richard A. LaPointe and his wife, Jean E. all of Worcester; three daughters, Shirley M. Govindasamy and her husband, Nicolas D’Ombrian of Lewiston, ME, Marcia A. Sherblom and her husband, Stephen of Auburn and Janet M. Courchaine of Worcester; a step daughter, Marcia Savage of Sherbon, MA; a sister, Betty Savell of Claremont, FL; 10 grandchildren, 9 great grandchildren and several nieces and nephews. She was predeceased by a daughter, Carolyn A. Bickford and two brothers, Charles Swisher and Clyde Swisher.
She was born in Aldie, Virginia the daughter of Owen T. and Lucy M. (Whittington) Swisher. Lucy was a member of the former St. Charles Borromeo Church. She worked at the Worcester Club for 28 years as a waitress, retiring in 1995. Lucy enjoyed her time cooking, baking, crocheting and going out with her dinner club. Her favorite pastime was spending time with her family.
The family would like to thank the staff of Care One Millbury and Compassionate Care Hospice for the kindness and support they offered during Lucy’s illness.
Her funeral is Friday, January 5th from O'CONNOR BROTHERS FUNERAL HOME, 592 Park Avenue with a Mass at 11:00 AM in Christ the King Church, 1052 Pleasant Street. Burial will follow in Worcester County Memorial Park, Paxton. A calling hour will be held from 9:30 until 10:30 AM in the funeral home. In lieu of flowers memorial contributions may be made to the Alzheimer's Association, 309 Waverly Oaks Road, Waltham, MA 02452.