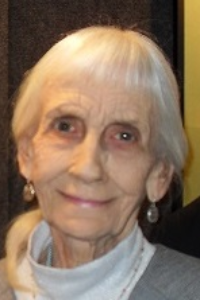 Atwood “Woodi” (Askew) Allaire, 85 of Worcester, died Wednesday, December 20th after a brief illness. She is survived by her children who dearly loved her and will miss her, Kirk, Constance, Emma, and David; and six grandsons and a great-granddaughter. A son, Theodore predeceased her.

Woodi was born in New York City in 1932, the youngest of three daughters. She began piano as a child and, as a teenager, studied piano at Curtis Institute of Music in Philadelphia. Later, as a young wife and mother, she continued at the New England Conservatory of Music in Boston. She graduated from the Moody Bible Institute in the early 1960s and was a Christian educator focusing on the spiritual lives of children, while serving too as choir director and church musician for several congregations in southeastern Massachusetts.

During the 1980’s AIDS crisis, Woodi was a committed volunteer and activist, and was among the small group of people who met to form an AIDS support group. It was about this time as well that Woodi opened Gallery 69A in what was a rundown and unused space in an old factory on Hammond Street, Worcester. Later, it was re-named Atwood Gallery and it was home and gathering place for many of New England’s contemporary artists. The gallery’s show openings were festive and often news-making. An article on a gallery reunion in 2008, the Worcester Telegram wrote, “the Atwood Gallery was a catalyst for the city's nascent art scene and Allaire's engaging personality and artistic boldness fanned the flames. She didn't show pretty pictures. She wasn't interested in helping you find a painting that matched your living room decor… exhibitions often confronted viewers, challenging them to see things in new ways.” When the gallery closed in 1990, Allaire was satisfied that the gallery had been a timely and critical important resource for local artists and art-lovers and had been an unqualified success in those terms.

Woodi had a warm and quirky sense of humor. She was a faithful, sympathetic and generous friend. She was also known to some friends as “Deb.” She spent the last year enjoying life with the residents and staff at the Brookdale Eddy Pond West. She possessed a deep faith and devoutly attended Our Lady of the Angels.

Her funeral Mass is scheduled for Saturday, December 30th at Noon, in Our Lady of the Angels Church, 1222 Main Street, Worcester. O'CONNOR BROTHERS FUNERAL HOME, 592 Park Avenue is assisting the family with arrangements.In lieu of flowers, family asks that contributions in her honor be made to the charity of your choice.