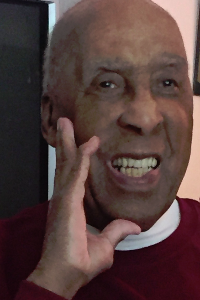 Worcester: Stanley H. Gutridge, 100 years of age, passed away peacefully on Thursday, December 21, 2017 at the Knollwood Nursing Center, Worcester, MA. His devoted wife of 43 years, Natalie (Johnson) Gutridge, predeceased him in 2011. He leaves Natalie’s nephew, William W. Johnson and Pearl Hinton Johnson, of Newburyport, MA, adoptive daughters, Beth-Anne Duxbury of Paxton, MA, Carol A. Griffin-Cohen and her husband, Andrew J. Cohen, of Saunderstown, RI, granddaughters, Melissa R. Peters and her husband, Joseph J. Peters of Worcester, MA, Tara M. Litowsky of New York, great grandchildren: Tyler J. Peters, Jason S. Withers, Joseph J. Peters, Jr., Ava R. Peters all of Worcester, MA. In addition, Stanley’s life-long commitment to service touched hundreds of people, of all ages, in the Worcester community whom Stanley considered his family. He would often say, “In a way, I have children everywhere”.
Mr. Gutridge, the grandson of a freed slave, was born in Oak Bluffs, Martha’s Vineyard, MA on March 9, l917 to George W. Gutridge and Florida E. Wiggins. Stanley graduated from North High School in Worcester, MA, graduated the New England School of Accounting in 1942 as class valedictorian. In 1945, he graduated from his beloved Clark University receiving its first BBA degree. He later graduated with an M.B.A. from Anna Maria College, Paxton, MA in 1981. Mr. Gutridge had a long career as an accountant, serving in positions at many Worcester business pillars such as Allstate Insurance, State Mutual Insurance Company, and the Paul Hat Company. In addition, he cultivated a successful private practice servicing many of Worcester’s small business companies.
Most importantly, Mr. Gutridge will be remembered as a man devoted to his faith. He began teaching Sunday School in 1947 at his cherished Wesley United Methodist Church, Worcester and continued his service of teaching for forty two years. As a congregant of Wesley, he went on to serve in the capacity of Treasurer, Chairman and Superintendent of Education and in 1973 won Massachusetts Layman of the Year award. Faith was his guiding light by which all things happened; it was here he found his sustenance for writing and community service.
Mr. Gutridge rose to prominence in the community with many important posts and recognition for a “life of service”. Some of these include: member of the Advisory Board of the Salvation Army, Solicitor for the Community Chest, corporator of the Greater Worcester Foundation, Boy Scouts of America, Advisory Board member of the esteemed Worcester Historical Society, Treasurer of the Worcester Branch of the NAACP, and Treasurer of the African Heritage Institute. The city of Worcester and Clark University have bestowed prestigious awards for Stanley’s long-lasting contributions to equality and the importance of a cohesive community.
Mr. Gutridge was a prolific writer; the author of several books highlighting faith, community, family, and issues of racial injustice, as well as Op-Ed pieces in the Worcester Telegram and Gazette. “The secret to living to 100, is that you have your family, friends, and faith. The world was not made for me, it was made for us.”
After cremation, a celebration of Stanley’s life will be held on Friday, January 26, 2018 at 11:00 a.m. in Wesley United Methodist Church. Burial will be at a later date in Rural Cemetery. Memorial contributions may be made to Wesley United Methodist Church Memorial Fund or Clark University Scholarship Funds. Nordgren Memorial Chapel is assisting the family with arrangements. To leave a condolence message, please click link.