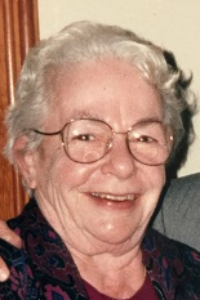 Rita A. (Sullivan) Masterson, 95, of Worcester, died Monday, December 18th at the Rose Monahan Hospice Home with her loving family by her side. Her husband of 42 years, William K. Masterson died in 1995. She is survived by her son Philip F. Masterson and his wife, Diane L. of Holden; two daughters, Marie F. Shea of Clearwater, FL and Anne F. Curley and her husband, Michael D. of Worcester; six grandchildren, Stephen, Rebecca, Erin, Richard, Kevin, and Brian and six great-grandchildren, Sam, Ben, Ryan, McKenzie, Caden and Jack.. She was predeceased by her son, Francis W. Masterson and her brother, Walter Sullivan.

Rita was born in Worcester, the daughter of Francis J. and Loretta A. (Luby) Sullivan. She was a graduate of the former Worcester City Hospital School of Nursing and worked in Polio Nursing in New York City and later at City Hospital in the outpatient department before retiring. Rita was a veteran of World War II serving in the U.S. Navy. Mrs. Masterson was a long time member of St. Andrew the Apostle Parish, a member of it's Women's Guild and served as a Eucharistic Minister and lector. She also was a member of the Worcester City Hospital Alumni Association and the Worcester Diocese Catholic Nurses Association.

Her funeral is Friday, December 22nd, from O'CONNOR BROTHERS FUNERAL HOME, 592 Park Avenue with a funeral Mass at 10:00 a.m. in St. Andrew the Apostle Church, 5 Spaulding Street. Burial will follow in St. John's Cemetery. Calling hours are Thursday, December 21st from 4:00 until 6:00 p.m. in the funeral home. In lieu of flowers memorial donations may be made to St. Andrew the Apostle Church.