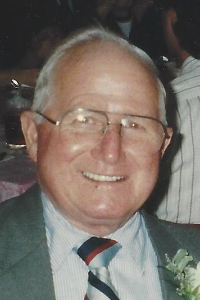 CHERRY VALLEY__David L. Parslow, 90, of Cherry Valley passed away peacefully at home on Thursday December 14, 2017. His wife of 64 years, Anne (Putis) Parslow died in 2012.
He leaves two sons, David J. Parslow and his wife Jaquelin of Warren and John S. Parslow of Cherry Valley and his girlfriend Debbie Christacakos; one daughter, Marianne Baldino and her husband Francis of Worcester; five grandchildren, Melissa, David, Nicole, Mary Beth and David, five great grandchildren, one nephew and one niece. He was also predeceased by a grandson, Anthony Baldino and a sister, Helen Day. David was born and raised in Worcester a son of David B. and Irene (Leonard) Parslow and has lived in Cherry Valley since 1955.
Mr. Parslow was a member for many years of the International Union of Operating Engineers, Local 4. He operated heavy equipment throughout his career including his work as a crane operator. He attended South High School and the High School of Commerce, Worcester. Mr. Parslow was a U.S. Navy veteran of World War II and served with the Sea Bees Construction Battalion.
David was a devoted husband and father. He was a manager for minor league, little league and senior league baseball when his children were young. He served on the Leicester Planning Board. David was an avid Red Sox fan and loved playing the slots at Foxwoods.
The funeral will be held on Wednesday December 20, 2017 with a service at 10:00 A.M. in HENRY-DIRSA FUNERAL HOME, 33 Ward Street, Worcester, Burial will follow in St. John’s Cemetery, Worcester. Calling hours in the funeral home are Tuesday December 19, 2017 from 5:00 to 7:00 P.M. In lieu of flowers, memorial contributions may be made to the American Heart Association, 300 5th Ave, Suite 6, Waltham, MA 02451.