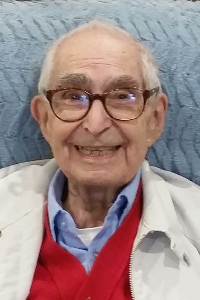 Panama City Beach, FL Haig Arakelian, 97, originally from Worcester, died peacefully Thursday, Dec 7, 2017, at Clifford C. Sims State Veteran’s Nursing Home in Panama City, FL. His wife of 44 years, Mary (Bejoian) Arakelian, predeceased him in 1998. He leaves a son, Michael Arakelian and his wife Leda of Hopkinton, a son, Harry Arakelian of Sutton, a daughter, Patricia Arakelian of Lynn Haven, FL, and a son, Arthur Arakelian of Panama City Beach, FL; a niece, Lucine Haroian of Worcester, three grand-children, Daron, Aren, and Adrina of Hopkinton. A sister, Arpenny (Haroian) Arakelian, predeceased him in 2013. A brother, Arthur Arakelian, predeceased him in 1974.
He was born in Worcester, son of Nazaret and Akabe (Tatian) Arakelian. Mr. Arakelian worked as a mechanic at Brown’s Garage, Harrington & Richardson, Worcester Boy’s Trade School, Bradley Car Co., Corey’s garage, Worcester Press and Steel, Robbin’s Machine Co., Charles Chevrolet Hills Garage, NE Tuller, Heywood Brunmark Ford, and the GM Assembly Plant in Framingham.
He joined the U.S. Army, 1943 – 1946, and served overseas during WWII, the Army NG, 1947 – 1957, the USAF ANG, 1957 – 1961, USAF Active Duty, 1961 – 1962, supporting the Berlin Airlift. He was awarded the Army Good Conduct Medal, American Campaign Medal, European-African-Middle Eastern Campaign Medal, and the WWII Victory Medal. His final assignment was the USAF ANG, 1962 – 1976, as the supervisor of Power Production, 101st Air Control Squadron, Green Hill Park, Worcester.
He was a member of the Armenian Church of Our Saviour. He was also a member of the AACC Social, the Worcester Boy’s Club, YMCA, and a local motorcycle club. As a family man, he loved and cared for his family immensely. He enjoyed taking the family to the beach in South Chatham and loved the sun and being by the water. His passion was motorcycles, and purchased his first Harley-Davidson when Nate Sheldon Motorcycles first opened in Worcester. During his tour of duty in WWII, he drove military Indian motorcycles. He especially loved Armenian food. He loved watching Westerns and Classic movies, and he loved reading the newspaper. He enjoyed the warmth of the Florida sun. But most of all, he loved his beloved wife, Mary.

A Funeral Service will be held Saturday, December 16 at 10:00AM in the Armenian Church of Our Saviour, 87 Salisbury St. Burial will follow in Hope Cemetery. Visiting Hours will be held Friday, December 15 from 5:00 to 8:00PM in CALLAHAN~FAY~CASWELL Funeral Home, 61 Myrtle St. In lieu of flowers, memorial donations may be made to the Armenian Church of Our Saviour.