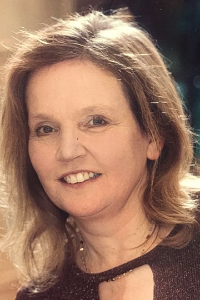 Jody A. (Varaska) Dionis, 54, passed away on Wednesday, December 6th at Tufts Medical Center in Boston after an incredibly courageous 6 month battle. Jody was born and raised in Worcester, the daughter of the late Joseph and Mary (Lacoste) Varaska. She graduated from Doherty Memorial High School and moved to Gainesville, Florida with her husband where they attended the University of Florida together. Jody received her Bachelor’s Degree in Elementary Education while raising their daughter Ariana who was born a Florida Gator and continued her parent’s legacy by completing her undergraduate degree there years later. Jody and her family relocated to Basel, Switzerland where Jody became ingrained in the Swiss culture and taught at the Open Door pre-school in Basel. Jody met her life-long friend, Irene in Switzerland and would reunite in Massachusetts years later forging a special friendship. Jody and family returned to the Worcester area where they settled and continued to raise their family.

Jody taught with her close friends Miss Judy and Miss Toni at the Saint Spyridon Cathedral Nursery School for 10 years and at the Play-Learn-Preschool at Wesley United Methodist Church. She also was a faithful volunteer for the church’s Food Pantry. Jody was an avid reader who loved to travel. She enjoyed quaint book stores, coffee shops and art museums. Jody and Jack enjoyed their many travels throughout Europe, Canada, across the U.S. and of course, all over New England. She had a strong love for Akron, Ohio where Christine, her incredibly caring childhood best friend and pen pal of 40 years, resides. Her extended Ohio family made several trips to Boston to be by Jody's side to comfort her during her lengthy hospital stay.

Jody's constant gentle caring of others and kind generous spirit will continue to live on through those she has touched throughout the years. She was truly altruistic and didn't measure her accomplishments by what she attained in life but rather what she was able to give to others. Her unfaltering love for others has shown everyone the real meaning of a true friend. Jody wishes to be remembered as someone who always put others first and provided meaningful support.

She will be missed beyond words by her devoted husband and best friend John, her daughter Ariana, sons Christopher and Daniel, a brother John Varaska, her mother and father in-law Chris and Harriet Dionis, her brother in-law Chris Dionis, Jr., brother in-law Michael Dionis and his wife Janice, sister in-law Marisa Dionis, a nephew Matthew Dionis with his wife Christina and their daughter Ava, a niece Kaitlin Ruffo and her husband Joseph. Jody was predeceased by her brother Vincent Varaska.

The family would like to extend their heartfelt thank you to all the nurses, staff, medical team and her devoted cardiac surgeon from the Cardio-thoracic Intensive Care Unit at Tufts Medical Center for their unwavering care and devotion to Jody and her family for the past 6 months.

In lieu of flowers, memorial contributions may be made to the Worcester Animal Rescue League, 139 Holden St. Worcester, MA 01606 in memory of Jody and in the spirit of her love for all animals especially her fluffy companions Slushy and Smokey.