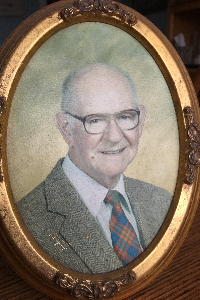 LEICESTER; Robert James Wright, 95, died peacefully at St. Vincent’s Hospital in Worcester, on Saturday, December 2, 2017. Born on February 26, 1922 in Worcester, the son of John Samuel Wright and Mary McCullough Wright. He was predeceased by his wife of 48 years, Alice M. (Mulvey) Wright.
He proudly served in the Army Air Corps from 1942-1945 in the Pacific theatre during WWII. He was employed as a tool & die maker for 40 years at Crompton & Knowles and later at Leicester Die & Tool until his retirement in 1987.
Robert was a member of the American Legion Post #0443 in Cherry Valley, where he served as a Past Commander and also as Chaplain; lifetime member of First Presbyterian Church of Worcester, where he served as an elder, usher and general handyman. He enjoyed traveling to many WWII Night Fighter reunions; sharing time with family at numerous McCullough Graham Association reunions and spending summers at Camp Wilmot. During retirement, he became a member of the Leicester Senior Center where he attended their events; delivered Meals on Wheels and bowled until he was 94. He was a member of the Green Mountain Club and remained an avid Red Sox fan throughout his life.
He is survived by his five daughters; Mary Canane and her husband Robert of Loxahatchee, FL, Nancy Peresta and her husband William of Middletown, RI, Lynne Toth and her husband David of Westport, MA, Diane Gillies and her husband Donald of Arlington, MA and Barbara LaTour and her husband Joseph of Spencer, MA, ten grandchildren, two great-grandchildren, and a sister-in-law, Mary Prince and her husband Roger of Princeton, MA and several nieces and nephews.
He was predeceased by his siblings; Lillian McCullough, Mae Bell, John Wright and Elizabeth Wright.
A Funeral Service will be held Wednesday, December 6 at 10 A.M. in the First Presbyterian Church of Worcester, 125 Holden St. Those attending the Service are asked to go directly to the church. Burial with Military Honors will follow in Worcester County Memorial Park, Paxton. Calling hours are Tuesday from 5-8 P.M. in the MORIN FUNERAL HOME, 1131 Main St. Leicester. In lieu of flowers, donations are gladly accepted at the First Presbyterian Church, 125 Holden Street, Worcester, MA 01605; or Camp Wilmot, 5 White Pond Road, Wilmot, NH 03287.