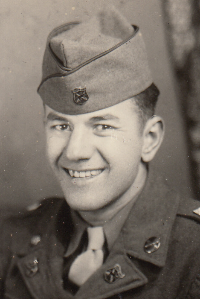 He was born and raised in the Fabyan section of Thompson, the youngest of the 10 children of Albert and Bridget (Kaput) Lenky and lived in Webster for the majority of his life. He was a graduate of the Boys Trade High School of Worcester in 1945.

He was an Army veteran of World War II, serving in the demobilization in the South Pacific. He was member of the Polish American Veterans and later became its commander aa well as being State Commander for the PAV of Massachusetts in the 1960’s. A founding member of the Webster-Dudley American Legion Post #184, he held a lifetime membership. He was a past commander to the Webster-Dudley Veterans Council.

Mr. Lenky worked for over 35 years at the American Optical Company in Southbridge, retiring as a supervisor in 1992.
He was a communicant of St. Andrew Bobola Church in Dudley and a life member of the Webster-Dudley Knights of Columbus #228. He served the Town of Webster on its finance committee until this past summer, was an inspector for the Board of Health for several years, and once belonged to the Webster Industrial Development Commission. He was a member of the Athletic Booster Club. He was an avid golfer and a former member of the Nichols College Golf Club in Dudley.

Mr. Lenky was a charter member of the Southern Worcester County Regional Vocational School District Committee which planned and completed the building of Bay Path Regional Vocational Technical High School in Charlton. He served from the first planning meeting until 1994, and from 1976 to 1980 was its chairman. He was awarded a citation from the Senate of the Commonwealth of Mass. in 1994 for his many years of dedication to the advancement of vocational education.

A memorial Mass will be held on Tuesday, December 5, at 10:00 AM in St. Andrew Bobola Church, 54 West Main Street, Dudley (please meet at the church). Burial will be in St. Joseph Garden of Peace. The Webster-Dudley Veterans Council will perform the military honors. Donations in his name may be made to either the Webster-Dudley Veterans Council, 3 Veterans Way, Webster, MA 01570. Arrangements are under the direction of Sitkowski & Malboeuf Funeral Home, 340 School Street, Webster.