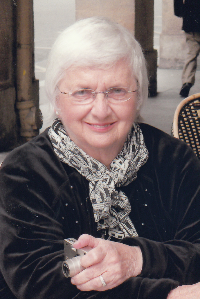 WEBSTER –Florence Morse Shaw, 91, passed away peacefully at home on November 18, 2017, surrounded by the love and care of her family. She was tirelessly attended in her last weeks by her daughters.

Born December 4, 1925 in Webster, Florence was the daughter of the late Delia (Belisle) Morse and Edward J. Morse of Webster. She was preceded in death by her husband of 56 years, John M. Shaw; by her brothers, Eudore “Ted” Morse, Eugene “Gene” Morse and Henry J. Morse; and by her sisters, Marion Belisle and Doris LaRocque.

Florence will be dearly missed by her two daughters, Susan Shaw Ostrowski of Aberdeen, NC and Nancy Shaw Chateauneuf of Dudley; by her sons-in-law, Dr. Edward Ostrowski and Russell Chateauneuf; by her sister, Jeannette Millette of Florida; by her five grandchildren, Laura Kessell, Pharm.D. and her husband Andrew, Pharm.D., Leslie Cavallini and her husband Dr. Maximiliano, and David Ostrowski and his wife Kayle, all of North Carolina; Peter Shaw Chateauneuf and his wife Theresa of Massachusetts, and Michael Morse Chateauneuf and his wife Victoria of Rhode Island. Florence also leaves the five great-grandchildren she doted on: Samuel, William, Max, Jack and Cecilia (with two more great-granddaughters on the way).

Florence attended St. Anne’s Elementary School where she retained four lifelong friends, Priscilla Donais, Gloria Gilbert, the late Irene “Dukey” (Duclos) Rulli, and the late Jeannette Rowe. Florence’s high school education was interrupted during WWII, when at age 16 she went to work for the war effort, packing gears to send to the labs at Los Alamos, NM. She returned to graduate with Bartlett High School class of 1946. She kept up with friends from both the class of ’44 and ’46 throughout her life.

Florence married the love of her life, John M. Shaw in October, 1949. The couple was blessed with twin daughters 5 years later. Their birth was the greatest joy of her life.
Florence had a varied career spanning six decades. After graduating from high school, she prepared food at the local “Grill” owned by relatives. She clerked for 18 years at Webster Music Mart in the 1950’s and 1960’s, selling records and camera equipment, where she developed quite a following. She was a champion of Girl Scouting, and co-led GS Troop 563 in Webster for nearly a decade.

Florence loved learning and was thrilled to continue her education by returning to college in 1968. She graduated from Worcester State in 1971, later earning a Master of Education degree and many additional credits in Library Science. She belonged to the Kappa Delta Pi International Honor Society and the Phi Kappa Phi honor society for superior scholarship. She was also a proud member of the “Antiks,” a group of women completing college later in life.

Florence went on to become Head Librarian at Sutton High School from 1972-82 and at Shepherd Hill Regional High School in Dudley from 1983-88. While at Sutton, she founded and led the student Photography Club. She competed for and won a grant from the Town of Sutton’s Bicentennial Commission to produce “Sutton 1976,” a book of photographs she co-authored with her student Laurie Picard, who remained a lifelong friend.

After retiring in 1988, Florence researched her genealogy and created an extensive family tree spanning the U. S. and Canada. She later volunteered her services assisting Librarian Sr. Mary Luke at St. Louis Elementary School in Webster for over a dozen years, leaving only to care for her beloved husband John in his last illness. Florence worshipped for many years at St. Louis Church, where she belonged to the St. Louis League of Catholic Women. She was briefly called out of retirement in her late eighties to serve as Acting Director of the Pearle L. Crawford Memorial Library in Dudley.

Florence was a lifelong photographer, starting at age five. With the help of her husband, she photographed weddings and graduations as a side business for several years. In the late 1970’s and 80’s, she pursued her creativity in summer courses at the Maine Photographic Workshops in Rockport, where she honed her camerawork and darkroom skills. Starting in 2004 she transitioned to digital photography, and was proud to have photographed the weddings of all five of her grandchildren, alongside the hired professionals. She was a Francophile who decorated her home with photographs of Paris taken during the trip of a lifetime with her daughters in 2008.

Florence loved cars and planes, and continued driving until the last month of her life. As a young person she built models of aircrafts; and as a mature woman in the late 1970’s, she fulfilled a dream by taking flying lessons at a local airport. To avoid worrying her family, she kept this adventure a secret for nearly 30 years.

Florence loved history and immersing herself in a good project. After her husband passed, she pursued research projects about local history, as well as conducting extensive research into WWII. She consumed dozens of books, particularly about the war in the Pacific, and frequently attended webinars offered by her favorite historical museums. Her final project was centered on her husband John’s experiences as a Fireman First Class in the U.S. Navy, stationed in the Pacific during 1944-45 aboard the USS San Diego.

In her later years, Florence was frequently recognized and warmly greeted around the town of Webster, sometimes by people she hadn’t seen in years. She was always interested in people and continued acquiring new friends all her life, while delighting in the company of old friends and dear neighbors. Florence had a strong faith and abiding sense of gratitude that carried her through life. She will be forever remembered with love by the many friends and family members she leaves behind.

Relatives and friends are invited to visit with Florence’s family on Thursday, November 30, 2017 from 9:00 to 10:30 AM in Scanlon Funeral Service, 38 East Main Street, Webster. A funeral Mass celebrating her life will follow at 11:00 AM at Saint Louis Church, 14 Lake Street. Burial will be in Mount Zion Cemetery. In lieu of flowers, donations in her memory may be made to the library at All Saints Academy, 48 Negus St., Webster, MA 01570. Arrangements are under the direction of Sitkowski & Malboeuf Funeral Home, 340 School St., Webster.