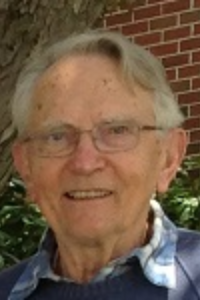 George S. Pond, Jr., 86, of Auburn, died peacefully, at home on Monday, November 20th. He is survived by his wife of 65 years, Elaine M. (Lavoie) Pond; three daughters, JoAnn Daoust and her husband, Jack of Moosup, CT, Diane O'Connor and her husband, Jim and Gina Skog and her husband, Rob, both of Auburn; five grandchildren and seven great-grandchildren. He also leaves his long time friend, Frank Miller. He was predeceased by his step-father, H. Sigfrid Johnson and his brother Albert N. Pond.

He was born in Worcester, the son of George S. Pond, Sr. and E. Adella (Tannebring) Pond. George was a graduate of Auburn High School, and served his country during the Korean War in the Army. He had worked for over 25 years as a machinist for the Norton Company, retiring in 1991. If you didn't find him working in his gardens, he could be found puttering away in his amazing workshop. He will be remembered as a wonderful Husband, Father, Grandfather and friend, always putting the needs of others before his own.

The family wishes to extend their heartfelt thanks to Luke, his night aide and the VNA Hospice, for their excellent care and support during this difficult time.

His funeral is Wednesday, November 22nd, from O'CONNOR BROTHERS FUNERAL HOME, 592 Park Avenue with a funeral Mass at 11:00 a.m. in St. Peter's Church, 931 Main Street. Burial will follow in Hillside Cemetery, Auburn. A visitation will be held for 9:30 until 10:30 the morning of the funeral in the funeral home. The family asks that flowers be omitted and contributions made to the charity of your choice.