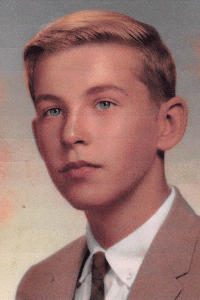 JEFFERSON- John Norman Daby, passed away peacefully at The Hermitage Golden Living Center on Saturday, November 18th. He was 71.

He was the husband of the late Patricia Mary (Conley) Daby who passed away in 2016.
John was born in Worcester on August 8, 1946, son of the late John and Janet G. (March) Daby. He graduated from Commerce High School in 1964 and attended Worcester Junior College. He was employed by Digital Equipment Corporation. John continued his education throughout his life even taking college courses up until his passing. In his life, he earned five associates degrees in various concentrations. Mr. Daby was a proud veteran and served his country in the United States Army during the Vietnam War. Both he and his wife were very active in the Town of West Boylston and resided in there for many years before moving to Hyannis. John was happiest in his home solving mathematic puzzles and watching his favorite show, Big Bang Theory.

He leaves behind many that will miss him dearly including his sons, Jonathan Daby and his wife, Jennifer of Worcester, Kristopher Daby of Sturbridge and Brent Daby of Jefferson; a daughter, Tiffany Daby of Grafton; his grandchildren, Mia Sandra Daby and Jarred Daby; two sisters, Janet Daby and Sue Cusson, both of Worcester; extended family members and friends.

Family and friends will honor, remember and celebrate his life by gathering for visiting hours on Tuesday, November 21st at FAY BROTHERS Funeral Home, 1 West Boylston St. , West Boylston. Calling hours will be 5 PM to 7 PM, A Mass of Christian Burial will be celebrated at 10:00am on Wednesday, November 22nd at Our Lady of Good Counsel Church, 111 Worcester St. ,West Boylston. Burial will follow at Mount Vernon Cemetery. In lieu of flowers, donations may be made to the American Diabetes Association, 260 Cochituate Rd., #200, Framingham, MA 01701