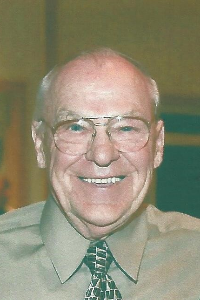 Teddy Stanley Siemaszko, 89, of Worcester died peacefully Friday November 17, 2017 in the Worcester Health Center. His wife of 60 years, Eleanor D. (Genander) Siemaszko died in 2008.
He leaves his children, Mark S. Siemaszko and his wife Karen of Upton; Deborah A. Karlgren and her husband Paul of Shrewsbury and Thaddeus S Siemasko of Beverly; six grandchildren, Sarah, Benjamin, Dana, Derek, Emma and Abby, three great-grandchildren, a brother, Joseph Siemaszko and a sister, Helen A. Lebel and nieces and nephews. He was also predeceased by a sister and three brothers, Jane C. Luikey, and Stanley, Benjamin and Vincent Siemaszko. He was born in Worcester, a son of the late Daniel and Tekla (Sniegowski) Siemaszko and has lived here all of his life.
Mr. Siemaszko was a machinist for many years for N. E. High Carbon Wire Corp., and later was a courier for the Fallon Clinic. He retired many years ago. Teddy was a graduate of Worcester Boy’s Trade High School and was a United States Navy veteran of World War II. Mr. Siemaszko was a member of Our Lady of Czestochowa Church, the Greendale Retired Men’s Club and the YMCA Silver Sneakers exercise group. He was an avid golfer and cribbage player. He also enjoyed polka music.
The funeral will be held on Tuesday November 21, 2017 from HENRY-DIRSA FUNERAL HOME, 33 Ward Street, Worcester with a Mass at 10:30 A.M. in Our Lady of Czestochowa Church, 34 Ward Street, Worcester. Burial with be in Notre Dame Cemetery, Worcester. Calling hours in the funeral home are Monday November 20, 2017 from 6:00 to 8:00 P.M. In lieu of flowers contributions in Teddy’s memory may be made to the Alzheimer’s Association, 309 Waverley Oaks Rd, Waltham, MA 02452.