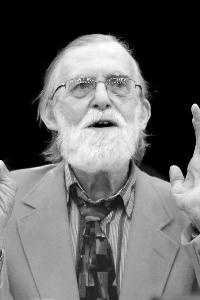 Frederick R. Bauer, 84, of Worcester, a long-time professor at Assumption College died on Tuesday, November 14th in the Rose Monahan Hospice, surrounded by his family.
He leaves his wife of 37 years, Nancy R. Alexanian; two brothers, Daniel Bauer of Michigan and Adrian Bauer of Ohio; four sisters, Mary Dibler, Judy Salcedo, Helen McMahon and Catherine Bauer all of Ohio; as well as many nieces, nephews and cousins. He was the son of the late John A. and Bernadette (Armbruster) Bauer of Akron, Ohio.
He attended St. Michael College (Union City, NJ 1954-1961), completing 7 years of study, including 3 years of philosophy, 4 years of cannon law, Biblical studies, dogmatic and moral theology in preparation for ordination to the Roman Catholic priesthood.
He left the priesthood in 1975 and married Nancy in 1980; yet never lost his faith nor his desire to teach. Teaching was his way to continue his beliefs.
Dr. Bauer’s first teaching experience was at the Angelicum University in Rome, Italy. In 1964, he earned his Licientiate in Philosophy. He earned his Ph.D at the University of Ottowa, Canada in 1968. His pastoral study was at Queen’ College, NYC in 1970. He accepted a position at Assumption College where, for 47 years, he taught philosophy, challenging his students and colleagues to see the world with his unique perceptions.
Dr. Bauer was an accomplished author. “The Divine Sting” is his mantra. In Fred’s own words, a Cartesian at heart, he believed, “By integrating facts traditionally segregated into categories of philosophy verses theology verses modern science, “The Divine Sting” will assist you in discovering for yourself how to convert faith in God and belief in the soul into solid impregnable and justifiable certain science.”
His funeral service is Saturday, November 25th with a Mass at 11:00 AM in Blessed Sacrament Church, 551 Pleasant Street. There are no calling hours. Burial will be private. In lieu of flowers memorial contributions may be made to St. Luke Foundation for Haiti, Attn.: Alfredo Benitez, 8980 SW 56th Street, Miami, Florida 33165.