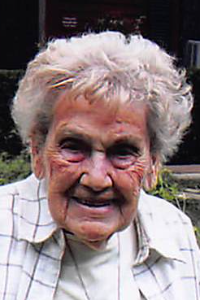 Margaret C. (Grieve) Goodale, passed away peacefully on Wednesday, November 15, 2017 at Oakdale Rehabilitation and Skilled Nursing Home. She was 101.

She was the wife of the late Arnold Phelps Goodale who passed away in 1994, and was married for 53 years.

She was born in North Adams on July 27, 1916 a daughter of the late George and Isabella (Graham) Grieve. She graduated from Worcester Commerce High School in 1934. For over thirty years, she worked for the Town of West Boylston as a Clerk in the Assessor’s Office. She was a member of the First Congregational Church of West Boylston where her love for knitting led her to make shawls for other members. Mrs. Goodale was very proud of her English and Scottish ancestry and was the longest standing member in the United States of the Daughters of Scotia. In February, she received the Boston Post Cane for being the oldest resident in West Boylston.

Mrs. Goodale was a talented seamstress and enjoyed making curtains for her home, which she would switch out every six months. In her later years, she took exercise and painting classes and discovered a hidden talent for art. Over the following years she created numerous paintings.

She was also a lifelong member of the Girl Scouts, and regularly attended reunions well into her 90’s.

She leaves behind many that will miss her dearly including her daughter, Bonnie J. Goodale, with whom she lived; two sons, Richard G. Goodale and his wife, Marlene of West Boylston and Bruce G. Goodale and his wife, Patricia of Saratoga Springs, NY; five grandchildren, Christine, Robert, Erin, Ross and Lauren; four great grandchildren, Owen, Evan, Wesley and Jackson. She also leaves several nieces and nephews who faithfully visited regularly.

Besides her parents, she is predeceased by her brother, Richard G. Grieve who was killed in action during World War II.

A Funeral Service will be held at 11:00am on Tuesday, November 21st at the First Congregational Church, 26 Central St., West Boylston. Arrangements are under the care of FAY BROTHERS Funeral Home, 1 West Boylston St., West Boylston. The family asks that flowers be omitted, and memorial contributions be sent to the West Boylston Beaman Library. To place an online condolence or for additional information please visit: www.faybrothers.com