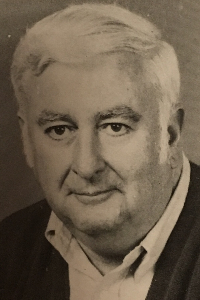 C. Carvill Moore, 84, of Leicester died Sunday, November 12th in St. Vincent Hospital after a brief illness. He was predeceased by a cousin, Katherine Stansfield.
He was born in Worcester the son of the late Clyde E. and Margaret V. (Carvill) Moore and graduated from South High School where he lettered in three sports. Carvill also graduated from St. Anselms and Assumption College and completed his graduate work at Boston University and Worcester State College. He was a veteran of the United States Army serving during the Korean Era. Carvill was an English teacher with the Leicester School Department, retiring in 1995. He was a past member of the Education Association of Leicester, the Massachusetts Teachers Association and the National Education Association, a member of the former Main South American Legion Post 341 and a lifetime member of the VFW and Worcester Lodge of Elks. Mr. Moore also served as chairman of the Leicester Public Library Board of Trustees. He enjoyed spending his winters in Safety Harbor, Florida over the years.
A graveside service will be held on Saturday, November 18th at 11:30 AM in New Town Cemetery, 8 General John Sullivan Way, Rollinsford, New Hampshire. There are no calling hours. O’CONNOR BROTHERS FUNERAL HOME, 592 Park Avenue, Worcester is directing arrangements.