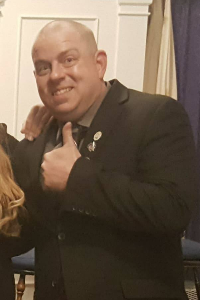 AUBURN/LEICESTER: Alex J. "AJ" Lessard 38, of Auburn, formerly of Leicester, died suddenly, Saturday, Nov. 11 after being stricken ill.
He leaves his parents Michael A. and Alice M. (Starr) Lessard of Leicester, his sister Anne M. and her husband Derek of Weare, NH, his longtime partner Audra M. Hachey of Auburn with whom he lived, a niece Mikayla L. Cusson of Weare, NH., a cousin Heather L. Iwaniuk of Worcester, and several other cousins.
Born in Worcester, he graduated from Leicester High School and later served his country with the U.S.Army.
AJ was an appliance installer and also worked in the warehouse for Percy's in Auburn.
He was a member of LARP out of the Knights Blades at Ye Old Commons in Charlton. He was also a member of SCA and the Oxford Lodge of Masons, A.F. & A.M.
Memorial calling hours are Thursday, Nov. 16 from 5 to 7 p.m. in the MORIN FUNERAL HOME, 1131 Main St., Leicester a reception will follow the calling hours at Hillcrest Country Club, 325 Pleasant St., Leicester. In lieu of flowers, contributions may be made to Oxford Masonic Lodge, P.O. Box 138, Oxford, Ma. 01540.