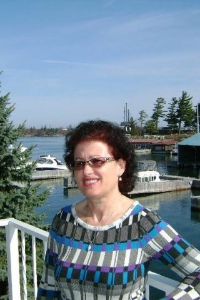 
SHREWSBURY-Alma Cico, 59, of Shrewsbury died on Monday, November 6, 2017.
She is survived by her husband of 33 years, Arben Cico, her daughter, Altea Cico of Geneva, Switzerland, her sister, Anita Shkurti and her husband Jani of Tirana, Albania, her brother Kosta Bidoshi and his wife Kristin of Niskayuna, NY and her sister-in-law Ermira (Cico) Tomorri and her husband Ylli of Tirana, Albania. She is also survived by many cousins, including Franc Koljaka, his wife Eni and their daughter Sarah, nephews Aleko Shkurti, Peter Bidoshi, Kejdi Tomorri, and nieces Anika Bidoshi and Orinda Tomorri. Alma was preceded in death by her father Petrit Bidoshi and mother Ana-Ermoza Filipeu both of Tirana, Albania.

Alma was born in Tirana, Albania. She graduated from the University of Tirana with a degree in Economics. Alma worked for many years as the Founding Director of the Health Insurance Institute in Tirana and then directed Health for All, a public health related NGO in Tirana.
In 1982 Alma met Beni, the love of her life; they welcomed their adored daughter Altea to their family in 1985. Alma immigrated with her family to the United States in 2001. They settled first in Worcester and later moved to Shrewsbury. Alma worked as a Dental Billing Supervisor at Edward M. Kennedy Community Health Center in Worcester.
A beloved wife, mother, sister, teze, and halla, Alma was dearly loved by her family, friends, co-workers and everyone who had the honor of knowing her. A woman of strong moral convictions who was thoughtful, caring and compassionate, Alma always gave of herself and always had time for others.
Alma enjoyed traveling, reading and spending time with her family and friends. Her laughter and bright smile lit up a room; her calm, quiet demeanor and integrity drew others to her. Her love for her family was boundless and exemplified throughout her life in big and little ways.
Alma was taken from us too soon; she will be deeply missed, but forever in our hearts.
Visiting hours will be held on Saturday, November 11 from 2:00 until 5:00 pm at Callahan-Fay-Caswell Funeral Home, 61 Myrtle Street, Worcester, MA. A service will follow in the coming weeks in Albania, where she will be buried. In lieu of flowers, memorial contributions may be made to St. Jude Children’s Hospital.