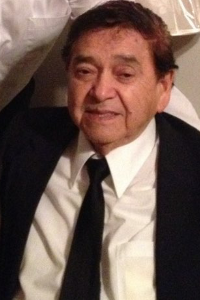 Worcester: Guido Y. Rodriguez, 89, passed away suddenly on Monday, November 6, 2017 at home. He leaves his wife, Martha C. (Campuzano) Rodriguez; a son- Guido M. Rodriguez, a daughter Dennise I. Rodriguez; a grandson Jorge Solano; a granddaughter Cecilia; and 2 great-grandchildren- Anthony and Yulissa. He was pre-deceased by a daughter Fanny A. Rodriguez in 2014.

Guido was born in Ecuador, son of the late Manuel and Petita (Cires) Rodriguez. He worked for many years as a machinist. He enjoyed spending time with his family. He was a huge sports fan and a professional soccer player in Ecuador as a young man. As a middle age man he arrived in New York but made his home in Massachusetts he LOVED visiting Boston's Quincy Market and the Common. He was very patriotic and hardworking. He retired from manufacturing in the early 90's. One of his proudest achievements was becoming an American Naturalized Citizen in 1995 in Boston. He spent his years of retirement still working around the house on his home in Worcester cutting trees and doing concrete work on the foundation.

A memorial service will be held on Saturday, November 11, 2017 at 2:00 p.m. in Nordgren Funeral Home 300 Lincoln St. Worcester. Calling hours will follow until 4 p.m. in the funeral home. For directions or to leave an online condolence message, please click link.