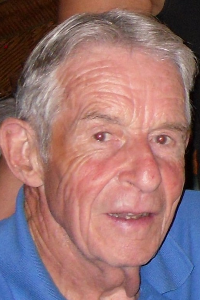 WEST BOYLSTON-James B. Adams, 89, passed away peacefully in the Knollwood Nursing Center on Thursday, November 2, 2017. He grew up in Worcester, the son of James and Martha (Bardsley) Adams.

He leaves his wife of 65 years, Eleanor (Snow) Adams; his son, James B. Adams, Jr. and his wife, Denise; his daughter, Sue Grant; two grandchildren, Michael and Kristina; his brother, William Adams; and his sister, Elizabeth Clauson.

James received an associate’s degree in Electric Engineering from Worcester Junior College and worked as a safety inspector for Liberty Mutual for 33 years, retiring in 1993. He also served in the Naval Reserves for 23 years. He was a man of great faith and a devoted member of The First Congregational Church of West Boylston, serving on many committees and performing in countless plays. He was an active member of the Greendale Retired Men’s Club and enjoyed entertaining audiences with his Maine humor stories. He was a tireless worker and could often be found being outside, cutting trees and chopping wood to stoke the wood stoves. He enjoyed spending time at the cabins in Maine and on the shores of Cape Cod.

There will be no calling hours or funeral at this time. In lieu of flowers, donations can be made to The First Congregational Church of West Boylston, 26 Central St., West Boylston, MA 01583. Arrangements are in the care of Fay Brothers Funeral Home, 1 West Boylston Street, West Boylston.