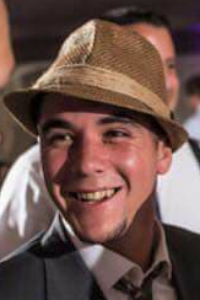 Worcester/Holden
Joseph R. "Nuzz" Nozzolillo, 31, of Worcester, died Friday, November 3, 2017 In UMass Memorial Health Care Center surrounded by his loving family and friends, after a long battle with Diabetes.
He leaves his mother, Celeste I. (Carlson) Nozzolillo and her fiancé, John J. Richinick, Jr. of Jefferson; a brother, Jonathan J. Nozzolillo of West Boylston; a sister, Leah M. Nozzolillo and her fiancé, Christopher P. McCormick and their daughter, Madison of Rutland; his maternal grandparents, Joseph P. Carlson and Viola R. Norris of Holden; his aunt and uncle, Mary Ann and Paul F. Carey, Jr. of Millbury; his aunt and uncle, Irene D. and Kenneth J. Carlson of Worcester; a cousin; Kevin P. Carey, Sr. and his wife, Renee of Worcester; his fiancé, Megan Oliver of Charlton; his adopted aunt, Nancy M. Gervais of Worcester and his beloved dog, Bentley. His father, Joseph A. Nozzolillo died in 2010. He was born in Worcester, raised in Holden and graduated from Saint John's High School in 2004 and later from Salve Regina College.
Nuzz was a well liked and respected Coxswain of the Saint John's Varsity Crew team. Joe's boat took first place in The Head of the Charles Youth 4 event in 2002. In 2003, he was selected to Cox in the Junior World Olympics in Schinias, Greece where his boat came in fourth place. He was a three-time Quinsigamond Cup Champion, and earned a Bronze Medal in The N.E.I.R.A. Grand Finals. He was a Pioneer Award recipient for Crew his senior year.
Joe was the proud owner of Professional First Line Answering Service of Worcester, a business he inherited after his father's death. He also worked closely with Jonathan and Leah at their other family business, Joey's Limousine Service.
He was a die-hard Boston Bruins fan and a former fan of the Worcester Ice Cats. He loved listening to and going to Dave Matthews Concerts. He also greatly enjoyed spending his Friday nights at his favorite restaurant, Brew City, where he would gather with his close friends. Nuzz was greatly loved by all who knew him.
Joe's family would like to extend to the entire team of dedicated Emergency Room as well as the 7th Floor ICU professionals, their most sincere, heartfelt appreciation and gratitude for the care and assistance rendered to Joe.
Joe's funeral will be held Wednesday, November 8 from Callahan~Fay & Caswell Funeral Home, 61 Myrtle Street, Worcester with a Mass at 11AM at Saint John's Church, 44 Temple Street, Worcester. Burial will follow in Saint John's Cemetery. Calling hours will be held on Tuesday, November 7 from 4PM to 7PM in the funeral home. In lieu of flowers, memorial contributions may be made to: UMass Memorial Foundation, Diabetes Center, 333 South Street, Shrewsbury, MA 01545.