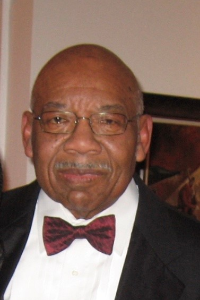 "The dream begins, most of the time, with a teacher who believes in you, who tugs and pushes and leads you on to the next plateau, sometimes poking you with a sharp stick called truth." —Dan Rather

For Edwin McMullen, 88, a longtime Worcester educator, education and guidance of our young people was truly his life’s calling. Edwin passed away peacefully on Monday, October 30 at the Rose Monahan Hospice in Worcester surrounded by his loving family.

Born in Lancaster, SC, Edwin was one of three children born to the late James H. and Hiawatha (Cunningham) McMullen. He graduated from Lancaster High School, where he was a standout three-sport athlete. He attended South Carolina State University, earned a Master’s Degree from Worcester State University, and his Doctorate in Education from UMASS Amherst. Following college, Edwin enlisted in the US Army and was a proud Korean War veteran.

Edwin worked for the Worcester School Department for more than 30 years as an educator and guidance counselor at Doherty Memorial High School . He was a member of the Covenant-Saint Andrew United Methodist Church in Worcester, where he was an active member of many groups there. Always active in social justice programs around the Worcester area, Edwin was an active member of the N.A.A.C.P and the Martin Luther King Jr. Scholarship Committee. His interests in photography and WWII historical documentaries were major hobbies he explored.

Edwin will be forever missed by his beloved wife of 47 years, Dr. Cynthia (Massingill) McMullen, his son, E. Bryan McMullen of Boston; his daughter, Meredith R. McMullen, MD and son-in-law Patrick Richardson of Encinitas, CA, and his brother, James F. McMullen (Marvelene), SC, and many nieces and nephews. Edwin was excitedly awaiting the arrival of his first grandchild. He was predeceased by his brother, William C. McMullen and sister-in-law Frances, and his sister Carolyn McMullen Young.
The family expresses great appreciation for the care provided by Daniel Massarelli, MD, Bessie Hazard, MD, and therapists and nurses of the VNA Care Organization.

Relatives and friends are invited to visit with Edwin’s family on Friday, November 3rd from 4-6 p.m. at the CALLAHAN, FAY & CASWELL Funeral Home, 61 Myrtle St., Worcester. His funeral will be held on Saturday, November 4th with a service celebrated at 10 a.m. at Covenant-Saint Andrew’s UMC, 24 Hamilton Street, Worcester. Burial will follow in Mooreland Cemetery, Paxton
.