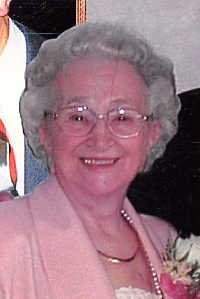 Southbridge – Agnes Rose (Clemens) Latino, 97, of Southbridge and formerly of Worcester, died on Thursday, October 12th in her home.
Agnes was married for 62 years to the late Joseph J. Latino who died in 2002. She is survived by her family, Barbara Latino Dupuis and her husband Brian, of Southbridge with whom she lived, and their children, Stephanie Dupuis of San Diego, CA and Kimberly Dupuis of Southbridge; Elizabeth Latino and her husband, Paul Tesik of Mount Holly, VT; Anna Peterson and her husband, Donald of Worcester; a brother, Peter Clemens of Florida; a daughter in law, Joyce Latino of Worcester; 12 grandchildren; many great grandchildren, nieces and nephews.
Mrs. Latino was born in Athol, MA and is predeceased by a son, Louis Latino; three brothers, John, Charles and William and three sisters, Pat, Frances and Bernie.
Agnes worked for over 25 years as a nurse for the Commonwealth of Massachusetts at Grafton State Hospital and later worked at Worcester State Hospital where she retired from. She was an accomplished seamstress and quilter and she took great pleasure in baking and cooking meals for her family. Agnes enjoyed going to the Worcester YMCA, traveling after her retirement and she looked forward to her weekly trips into Boston. She was a devoted mother and grandmother and will be greatly missed by her family.
The family would like to extend a heartfelt thank you to Dr. Robert Maloney and the staff of Overlook Hospice for the exceptional care, love and support that was given to Agnes during the last stage of her life.
The funeral will be held on Tuesday, October 24th from the Alfred Roy & Sons Funeral Home 12 Hammond St., Worcester with a Mass at 10 AM in St. Peter’s Church 929 Main St., Worcester. Burial will follow in Notre Dame Cemetery, Worcester. Family and friends are invited to calling hours on Monday, October 23rd from 5 to 8 PM in the funeral home. Memorial contributions in memory of Agnes may be made to the Alzheimer’s Association 309 Waverly Oaks Road Waltham, MA 02452.
To share a memory of Agnes, sign the online guestbook, or for directions please visit www.Royfuneral.com