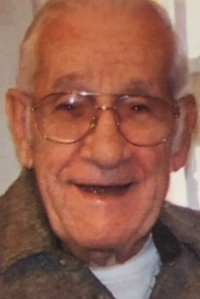 Oxford
Nicholas S. Constantine, 93, passed away peacefully in his home on Monday, October 16, 2017.
His beloved wife of 66 years, Bertha M. (Beaudoin) Constantine died May 15, 2016.
Nick leaves behind many nieces and nephews and his sister-in-law, Barbara Constantine of Oxford.
He was born in Fabyan, CT. son of the late Samuel and Athena (Natsis) Constantine on August 26, 1924. Nick was also predeceased by two brothers, Demetri and Vasil Constantine.
He attended Nichols College in Dudley and received an accounting degree after graduating from Tourtellotte Memorial High School in Thompson, Ct., class of 1942. Nick then enlisted in the U.S.Army during WWII and was Honorably discharged, receiving a Purple Heart. He was a member of the Oxford American Legion Post #58 for 62 years, a member of Sts. Constantine and Helen Greek Orthodox Church, enjoyed playing pitch and visiting with friends for coffee at N&J Donuts and Wendy’s. Nick was a Patriots, Trump and Red Sox fan and he loved to travel, always helped with family and friends as an accountant. His last job was as Finance Director for Worcester Academy where he worked for 18 years before retiring in 1986.
He will be missed by all that knew him as Uncle Nick or as the gentleman who would take a walk down Main St. stop and chat with people along the way and always a big smile.
The Funeral Service will be Monday, October 23, 2017 at 10 AM., in Sts. Constantine and Helen Greek Orthodox Church, 35 Lake Parkway, Webster followed by burial next to his wife Bertha, at Mt. Zion Cemetery, with Military Honors provided by the Webster-Dudley Veterans’ Council.
Calling Hours at the ROBERT J. MILLER FUNERAL HOME and LAKE CHAPEL, 366 School St., Webster will be Sunday, October 22,2017 from 5-7PM, a Trisagion Service will be at 6PM in the Funeral Home.
In lieu of flowers, Memorial Contributions may be made to: Sts. Constantine and Helen Greek Orthodox Church, P.O. Box 713, Webster, MA. 01570.
An On Line Guest Book to leave a Condolence or to Share a Memory of Nick, please visit: RJMillerfunerals.net