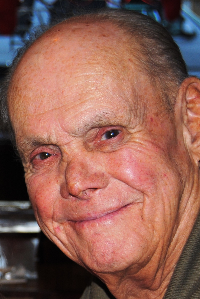 John Alton “Jack” Barrett, 88 years young, bid farewell to life and the family he loved beyond measure with a bittersweet, raspy, raucous kind of laugh, and a “let me go, I’ve had a good life”, and “I love you all” declaration from his lips. Jack would tell you that “Life is so precious” and “God is Love”. He died of complications of old age on Monday, October 9, 2017, in Overlook Hospice. He will be deeply missed!

He was born in New Rochelle NY on May 17, 1929, the son of Alton Herbert & Gladys Leila (Walch) Barrett. He was predeceased by 4 brothers and 1 sister: Raymond W. Farnum, Arthur Bates Barrett, Horace Mitchell “Bud” Barrett, Daniel Lincoln Barrett, and an infant sister Ruth. He was deeply influenced by his relationship to his maternal grandparents, Horace H. “Buddy” Walch and Winifred E. (Bates) Walch.

He instilled in our family a love for life, respect for our fellow man, a mischievous twinkle in the eye, an appreciation for poetry, history, and YES ~ POLITICS ( Ugh! & a LOL!), that freedom is not free, self-reliance & work ethic are good qualities, and to have never ending HOPE!

Jack was a man of great wisdom, a deeply spiritual man with a magnificent loving heart and incredibly brilliant mind. He lived life with gusto, had great humor, laughed often, and loved well. He had a deep love for his wife Vada, saying “we had something really special, your mother and I”. He was always young at heart and would tell us…“growing old is mandatory, growing up is optional”.

He proudly served our great nation in the US Navy from 1946 to 1952. He enlisted at 17 years old from Newport RI. He did his basic training in the Great Lakes, Chicago, Illinois, where he set out hitch hiking with a friend along Route 66 to report for duty in San Francisco, California. He served in Kodiak and the Aleutian Islands of Alaska, the Mediterranean and beyond! Many a great story has been told of his adventures, and some kept quiet, only hinted to by the scar of a serious head injury and the arm tattoo of a skull & banner with the words “Death before Dishonor”.

Upon discharge, he tried his hand at raising beef cattle with his brother Bud on a farm in Concord VA. Relatively short lived, he soon moved to Lynchburg VA where he met the love of his life Vada, who followed him back to Webster where he finally settled down to raise their family.

in the early 1960’s, Jack ran an outdoor ice skating arena in Webster on the corner of Thompson & Birch Island Roads, but due to an ultimatum and a proposed promotion from his full time employer (BW Footwear), he gave up his beloved freedom to settle down and work in manufacturing. He was an entrepreneur at heart, a leader with great problem solving skills, a Jack of all trades, and founder of his own manufacturing firm, Barrett Stitching Co., in 1975.
In around 1990, after retirement, he created Jack’s Hope Realty on Prudence Island RI. As owner, broker of his own real estate sales company, and with the help of his friend and fellow agent, Sam Cambria, they were able to share the dream of vacation home ownership with other Prudence Island RI enthusiasts for many years! Jack excelled at whatever he put his mind to!

He was a physical kind of guy and loved to swim, sail, ice skate, play ice hockey, touch football, softball, run, snow ski, and enjoyed raking leaves on a windy fall day (to the chagrin of our neighbors, LOL). Captain Jack, the old salt, would take the land-loving Vada and grandchildren on expeditions in Narragansett Bay on his Sports Fisherman boat and would teach the grandchildren how to hold the helm from the fly bridge. They often joyfully played and ate at Rocky Point Park, welcomed the Tall Ships to Newport a time or 2, explored and camped on Prudence and Dutch Islands! In later years, he thoroughly enjoyed winters in Southwest FL. He enjoyed walking the boardwalk at Englewood beach, the sunsets at Manasota beach and the lighthouse at Boca Grande. He was tech savvy and an avid Ancestry.com guru, who let us know our heritage, firmly planting our roots in the rich soil of our loving past some-ones! We are grateful for his great legacy, and his very own incredible penned poetry! Farewell & Enjoy the Tide Dad, Grampa, Uncle Jack! See You Soon!

Visitation will be held on Sunday, October 15, 2017 from 2:00 to 4:00 pm in Scanlon Funeral Service, 38 East Main Street, followed by a service at 4:00 pm at the funeral home. The Reverend John R. White will officiate. A graveside service will be held at 11:00 am, Monday, October 16, in Mount Zion Cemetery, Worcester Rd, Webster. The Webster-Dudley Veterans Council will perform military honors.
Donations in his name may be made to the Disabled American Veterans, at: DAV, 24 Beacon St, Suite 546 Statehouse, Boston, MA 02133. For more information on local DAV services to veterans, please visit www.DAVMA.org