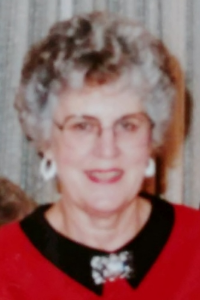 AUBURN-Doris E. (Hjerpe) Anderson, 91, died Saturday, October 7, 2017 at Webster Manor Healthcare. She was born in Worcester, daughter of Garfield and Martha (Melander) Hjerpe and graduated from Shrewsbury High School. She lived on Pakachoag Street for most of her life prior to moving to The Woods at Eddy Pond. Mrs. Anderson was employed by the Town of Auburn for many years retiring as Assistant Town Accountant. After retirement, she worked part-time at O’Coin’s for many years. She was a member of Pakachoag Church and in later years, Bethlehem Covenant Church. She enjoyed sewing, quilting and crocheting.

Doris was predeceased by her husband of 34 years, Donald G. Anderson on July 12, 1982. She is survived by her daughter, Martha C. Connor and her husband William of Auburn, a son, Bruce D. Anderson and his wife Bobbi of Upton and a brother, William G. Hjerpe of North Attleboro. She also leaves four grandchildren; Adam Anderson and his wife Daniela, Andrew Anderson, Rebecca Burgoyne and her husband Andrew and Kayla Connor, four great grandchildren and several nephews and nieces.

Funeral services and burial in Hillside Cemetery will be private. In lieu of flowers, donations in her memory may be made to the Alzheimer’s Association, 309 Waverley Oaks Road, Waltham, MA 02452. Arrangements are in the care of LINDQUIST LUNDIN Funeral Home, 36 Butler Street, Worcester.