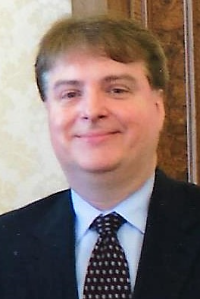 David Mark Banach, 50, of Lawrenceville NJ, formerly of Auburn, MA, passed away on Tuesday, October 3, 2017, after a courageous battle with cancer, in University Medical Center of Princeton at Plainsboro, NJ, with his loving family at his side. He is survived by his mother Jane F. (Anisko) Banach; his brother Archbishop Michael W. Banach, Apostolic Nuncio (Vatican Ambassador) to Senegal, Cape Verde, Guinea-Bissau and Mauritania; as well as by an uncle and many cousins. He is predeceased by his father Wallace M. Banach.
Born in Worcester, MA, Mr. Banach graduated from Auburn High School, and from The College of the Holy Cross with a Bachelor of Arts in Mathematics. After receiving a Master of Science in Mathematics and pursuing doctoral studies, respectively from the University of Chicago and at the University of Michigan, Ann Arbor, he was employed by Educational Testing Service in Princeton, NJ, where he was the Executive Director of College Board Programs. He was a member of Phi Beta Kappa, Alpha Sigma Nu (National Jesuit Honor Society), Pi Mu Epsilon (National Honorary Mathematics Fraternity), and the American Mathematical Society. While at the University of Michigan, David was the recipient of the Outstanding Teaching Assistant Award from the Department of Mathematics. He was a communicant at St. David the King Church in West Windsor, NJ and a parishioner at Our Lady of Czestochowa Church in Worcester, MA. He was a faithful Red Sox and New England Patriots fan, as well as a classical music enthusiast. David’s professionalism, compassion, generosity, faith and upbeat demeanor will be part of his legacy to family, colleagues and friends.
The funeral will be held on Tuesday, October 10, 2017 from HENRY-DIRSA FUNERAL HOME, 33 Ward Street, Worcester, with a Concelebrated Mass of Christian Burial, with Archbishop Banach as principal celebrant, at 11:00 A.M., in Our Lady of Czestochowa Church, 34 Ward Street, Worcester. His Excellency Most Reverend Robert J. McManus, Bishop of Worcester, will preside. Burial will be in Notre Dame Cemetery. Calling hours in the funeral home will be Tuesday, October 10, 2017 from 9:00 a.m. to 10:30 a.m.