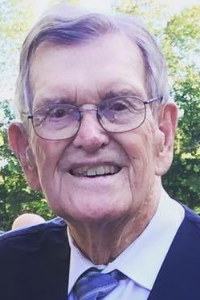 LEICESTER: Edward J. King, 93 of South St. Ext. in the Cherry Valley section of Leicester, died Sunday, Oct. 1 in St. Vincent Hospital, Worcester with his family by his side.
His wife of 65 years, Irene L. (Lemerise) died May 17th of this year. He leaves his son Wayne E. King and his wife June of Millbury, a brother Francis J. King, of Palm Coast, Fl., two sisters Barbra Gill of Reno, NV., and Dorothy Reid of Paxton, four grandchildren; Eric King and his wife Emilee of Whitinsville, Megan King of Millbury, Kimberly Roslund of Millbury and Brandon Roslund of Worcester a great granddaughter; Aleigha Martinsen, several nieces and nephews. He is predeceased by his daughter Maureen Roslund in 1996, sisters Ruth Hicks and Mary Garey and brothers Robert and Richard King.
Edward was assistant clerk of courts in Worcester for many years, retiring in 1989. He was Tax Collector for the Town of Leicester for 38 years.
Born in Worcester, he was the son of Edward J. and Ruth (Hutchinson) King, Sr. and later graduated from Leicester High School. He proudly served his country with the U.S. Navy during WWII. He was a member of Cherry Valley American Legion Post 443, St. Joseph-St. Pius X Parish, Knights of Columbus Council 4528 in Leicester and enjoyed spending time at the Leicester Senior Center. He was an avid camper and member of the Quinebaug Valley Campers. Along with his wife, they enjoyed spending time with family and friends, traveling and trips to the casino.
The funeral for Edward will be held on Thursday, Oct. 5 from the MORIN FUNERAL HOME, 1131 Main St., Leicester with a Mass at 10 a.m. in St. Pius X Church, 1153 Main St., Leicester. Burial will follow in St. Joseph's Cemetery, Leicester. Calling hours are Wednesday from 5 to 7 p.m. in the funeral home. In lieu of flowers, contributions may be made to the Maureen Roslund Memorial Scholarship Fund c/o Holy Name High School, 144 Granite St., Worcester, Ma. 01604.