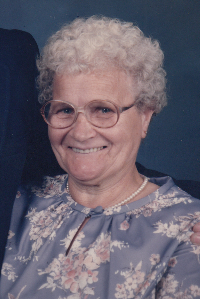 She was born in Samoklenski, Poland on August 2, 1918, daughter of Joseph and Catherina (Kodysz) Ciezabka. She endured working in a slave labor camp in Germany during World War II. She moved to Venezuela in 1948 and then to Webster in 1959.

Mrs. Werbecki worked as a framer at Webster Spring Company in Oxford for 12 years before retiring.

She was a communicant of Saint Joseph Basilica and a member of its Holy Rosary Sodality. She enjoyed planting and tending her annual garden and also liked cutting wood. Her grandchildren and great-grandchildren were her treasure.

The family would like to thank the staff at Webster Manor for their professional and compassionate care for Bernice during her time there.

The funeral will be held Tuesday, October 3, from Scanlon Funeral Service, 38 East Main St., with a Mass at 10:00 AM in St. Joseph Basilica, 53 Whitcomb Street. Burial will be in St. Joseph Garden of Peace. Visitation will be from 8:30 to 9:30 AM Tuesday in the funeral home, prior to the Mass. Donations in her name may be made to Saint Joseph School, 47 Whitcomb St., Webster, MA 01570. Arrangements are under the direction of Sitkowski & Malboeuf Funeral Home.